Someone needs to call the plumbers at Apple. 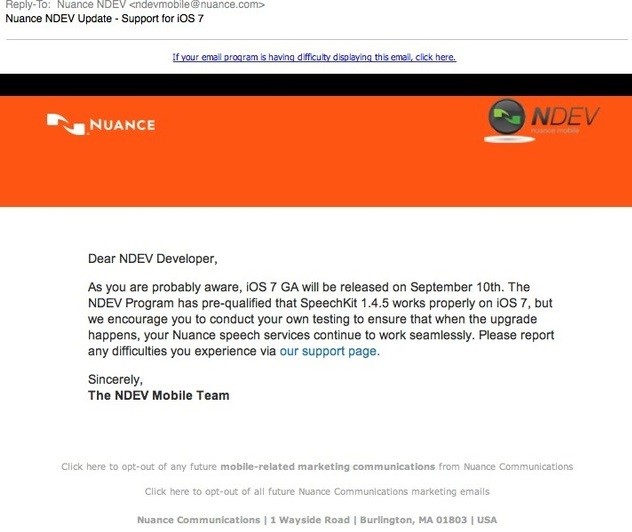 The email has since been pulled.

According to a new rumour from our ex staff writer Owen Williams, iOS 7 could be publically released on September 10th, ending the wait for the new and redesigned OS for iDevices.

Nuance, the company behind Siri, sent out an email that included a launch date stating:  “as you are probably aware, iOS 7 GA (General Availability) will be released on September 10th” and added that Nuance developers should ensure that the speech services for Siri work properly with the update before then.

The news of the email first appeared on Martin Pittenauer's Twitter account that linked to a screenshot of the email.

Somebody will get fired for that, I guess. #ios7 #releasedate https://t.co/wsLWhC7sgR

Historically the iOS update is usually released on iPhone day, with the Gold Master being made available a few hours later; and as Owen points out, it could also be their "one more thing" this year as well, making it available to consumers, as well as developers on the same day.

In any case, the date coincides with previous rumors which claim that Apple is to hold a big event on that day heralding the launch of the new iPhone 5S and 5C.

The email which could also be viewed directly on Nuance's server has since been pulled.