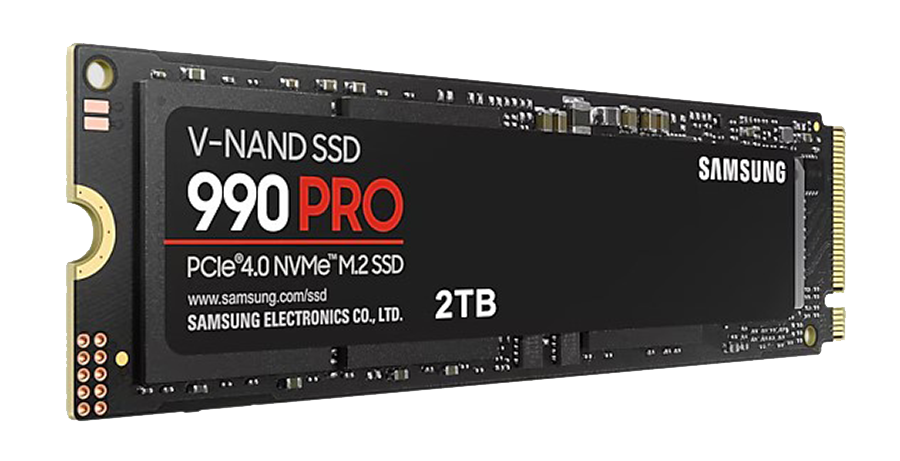 When you buy the fastest flagship SSD on the market, you expect a certain level of reliability and confidence from its performance, but things can and do go wrong sometimes, and customer support is paramount at instilling continued confidence in the brand. This has typically been the case for past Samsung drives, actually, even the non-flagship models have been highly reliable and perform excellently with very few that I have seen needing an RMA.

Colour me with sadness when within just a couple of days of buying the 990 Pro 2TB, I noticed that the drive health according to SMART data from both Samsung Magician and third party tools had dropped to 99%. For the record I have other Samsung SSDs with over 40TB written and still at 99% health 1.5 years later, so I knew this was not normal.

Within another day or so it had dropped to 98%, by this point I'd not even written 2TB to the drive. Fast forward a couple more days and the drive health was sitting at 95%

Something was clearly not right. I quizzed a a few tech communities online to find that I was not alone. I reached out to Samsung Memory by phone (Hanaro Europe BV deal with all Samsung storage related after sales support). I was told by a friendly voice that a few percentage drop was normal and if it continued to drop then I could send it in for RMA.

In the past the 980 Pro had the "0E" issue which was first discovered by owners and then spread around the tech community and then media coverage followed. It is not clear whether the 990 Pro is developing a similar issue at this stage.

It is worth pointing out at this point that the Samsung NVMe driver for Windows does not support the 990 Pro. Without this driver you cannot run any extended SMART tests in Samsung's Magician application as it says it needs the correct driver. This driver has not been updated since 2020. This in itself is not an issue, it just means there is no way to run the extended SMART diagnostics. Without the Samsung driver being active, Windows will use the Microsoft's NVMe driver on unsupported drives. Both drivers have the same performance otherwise and there are no system conflicts having both installed on the same system. Windows 11 does a fine job at driver management this way.

Around the same time I posted to OcUK and reddit to see if others had seen the same problem, as it turns out, they had, and there is a lengthy thread over at Overclock.net about it. Once my drive had dropped to 94% I filed the RMA with Samsung/Hanaro. 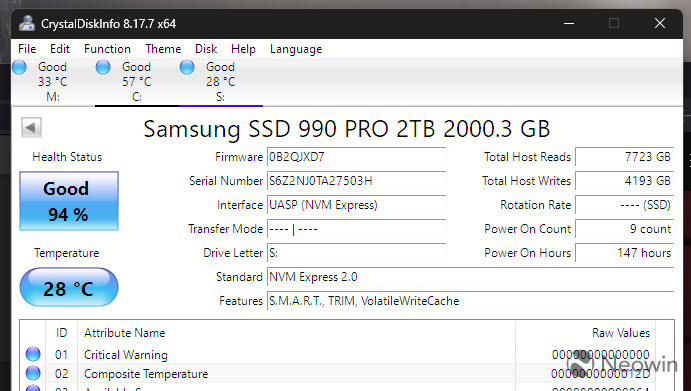 A few days later a shipment was on its way to me from Samsung/Hanaro. I had to email Hanaro to get info on what was found only to be told that the same drive is on its way back because no defect was found. Their email below: 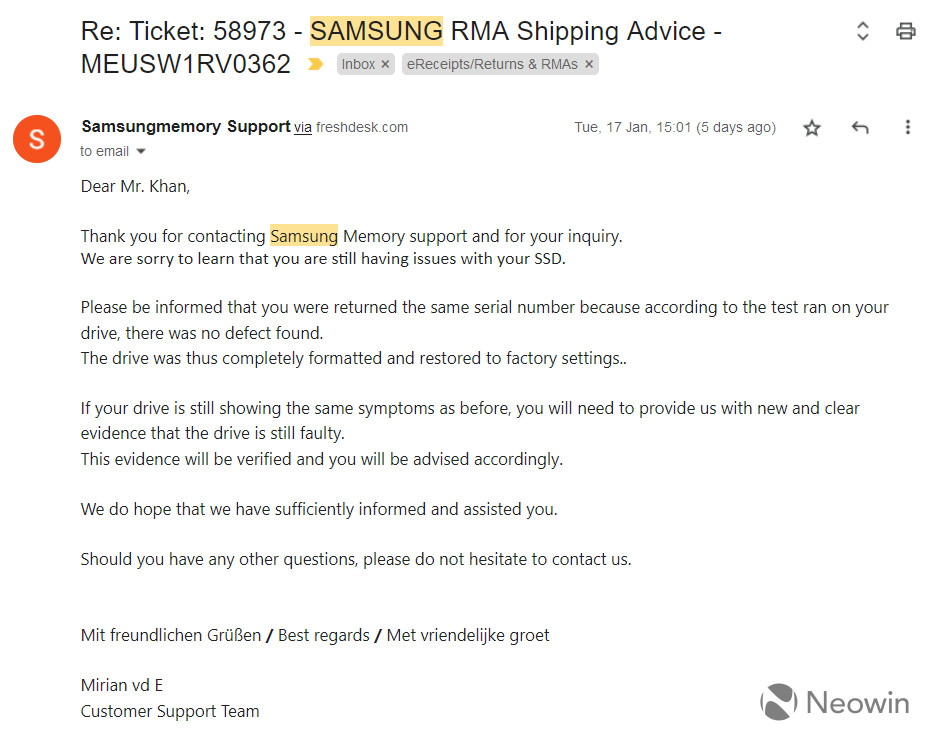 Naturally this is confusing, I had provided all the requested details and screenshots as evidence, yet Samsung's RMA folks neglected to actually check and clarify the issue at hand. I replied back asking for written confirmation that this sort of drop is normal in such a short space of time with such a low number of data written to the drive. At the time of writing, It had been 5 days and no reply.

The CrystalDiskInfo screenshot above shows the drive's health after it came back from Samsung RMA. The email from Hanaro states that the drive was reset to factory defaults, if this was the case then the drive's health should also have been reset to 100% but what we see is a drive that has simply been reformatted and nothing more. At the time of writing there is also no new firmware for the 990 Pro series.

If any of our readers have bought a 990 Pro model, then please share your experiences in the comments, has your drive dropped health percentage too? is it a boot drive or a storage only drive? It would be interesting to find out.

Update - 2023.01.23
Looking at comments on the linked forums and social media, there are more people coming forward with the same issue after checking their drives. A reader on Twitter has also shared that his 990 Pro has dropped to 64% with only 2TB being written.

Update 2 - 2023.01.23
Samsung's RMA division, Hanaro, have reached out and offered to A) Replace this SSD, and B) Try to replicate the problem. Quite why both of these options were not on the table before the issue became public is a mystery. We still request that readers continue to share their 990 Pro drive health stats and what region of the world they are in so that a better overall picture can be drawn of what appears to be a potentially developing situation.

Update - 2023.01.24
More owners of the 990 Pro have come forward reporting degraded health reporting in another reddit thread, this time in the r/hardware subreddit.

Update 1 - 2023.01.27
Today our friends at Computerbase.de have received an official statement from Samsung on this matter, please excuse the Google translation:

"Samsung stands behind the quality of its SSDs, including the new NVMe M.2 SSD 990 PRO. We are aware of reports of this issue and are currently investigating as user configurations vary." - Samsung Germany

A short statement for sure, but at least it is something official that confirms they are aware, and it is being looked into.

Update 2 - 2023.01.27
Samsung's Customer Support have now made a statement to Neowin which confirms the Samsung Germany statement to Computerbase.de above. The statement is as follows:

"Samsung is investigating suspicious symptoms and will keep you posted on our progress.
Thank you in advance for your patience." - Samsung Memory Customer Support (Hanaro)

We just have to wait a little bit now and see what solution Samsung have in mind is to remedy the issue. If you are affected by this, it is up to you whether to send your SSD into Samsung RMA or not at this stage. If the issue does appear to be a reporting bug, then I can see a firmware update being released, otherwise whatever statement they make next should set out next steps for owners of affected drives. Further updates to follow.