Rare's pirate adventure game Sea of Thieves is off to a tremendous start on Steam. Less than a week after its launch on the Valve platform, it has managed to go past the 50,000 concurrent player mark. The number has been increasing every day since launch.

Soon after its release, Sea of Thieves on Steam saw almost 20,000 concurrent players, which rose to almost 35,000 pirates sailing the seas during the weekend. However, even after the weekend, the concurrent player number has just kept rising, hitting 45,000 yesterday before finally breaching the 50,000 mark today. 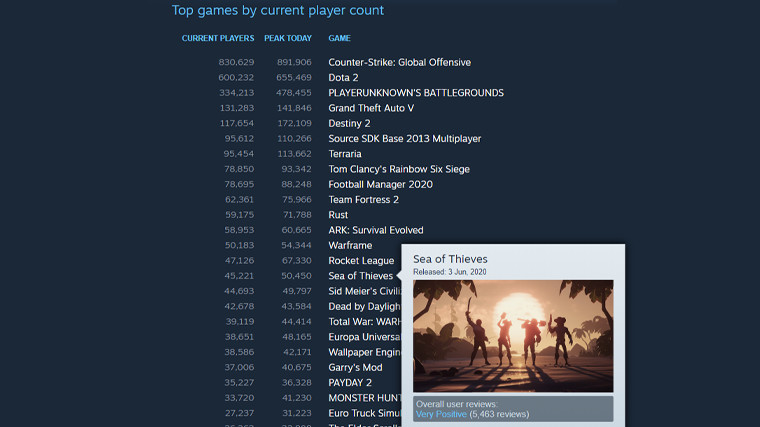 The success is even more impressive when considering Sea of Thieves is now over two years old, originally released in March, 2018, and has always been available on PC through the Microsoft Store and on Xbox Game Pass. Sadly, Microsoft doesn't provide player numbers for Xbox One and Microsoft Store PC versions to see just how much the playerbase has been impacted, especially since the game features cross-play.

Other popular Xbox Game Studios launches on Steam include Age of Empires II: Definitive Edition which saw over 34,000 players at its peak, while Halo: The Master Chief Collection had over 160,000 Spartans running around during its peak.

Sea of Thieves comes in at $39.99 on Steam, where it currently touts a Very Positive review score from over 5,400 user reviews. It certainly looks like Microsoft's decision to bring more Xbox games over to Steam has been a very successful one.