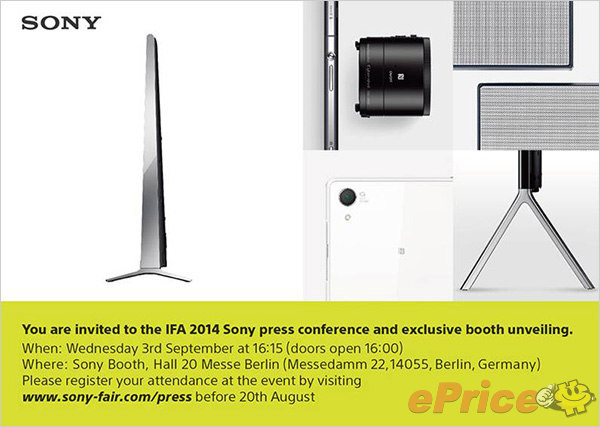 Sony will be holding an event during the IFA 2014 trade fair next month and its press invite has now leaked online with images of products that may be launched.

During IFA 2013, Sony launched the Xperia Z1 and it seems the company will be launching its next flagship at the same event, if a leaked press invite is to be believed. According to the leaked image, Sony's event is scheduled for September 3 and that is the same day as Samsung's UNPACKED event, which was the case last year as well.

Samsung is expected to launch its Galaxy Note 4 smartphone, while Sony could launch the Xperia Z3 whose images are already making the rounds online. The press invite has also revealed parts of other devices such as an attachable camera lens, a tablet stand and a mesh cover in addition to the rear of a smartphone.

It has been five months since the launch of the Xperia Z2 and as Sony releases two flagships in an year, it is safe to assume that the Xperia Z3 is one of the products that will make an appearance during IFA, next month in Berlin.