It's Monday morning on April 6th and I'm waiting for FedEx to show up with the Surface 3. Like a kid on Christmas morning, I'm pacing the house and running to the front door every time I hear a truck drive by, thinking maybe this will be the one; the magical truck that will deliver Microsoft's latest play into the lower-cost tablet market. At precisely 9:52 AM it arrived, and my journey of using a Surface 3 for the next two weeks began.

In talking with Microsoft about the Surface 3, they stressed how this is like the Pro 3 but smaller, fanless, and more accessible for consumers with a lower price point. Having heard all of that, and then sliding the 3 out of the box, this earlier conversation was awash in my brain. I thought, "Hey, this feels like a Surface Pro 3, but smaller" and my brain was right, because that was the point Microsoft set out to establish with the 3. So, here I am sitting on the ground in my living room, my dog is still freaking out that a stranger was at the door for 10 seconds, 15 minutes ago, but he doesn't care and continues to bark and pace a similar path I did while waiting for the tablet.

Turning on the tablet fired up the setup process for Windows 8.1, and I forgot how long this process takes as I have gotten used to Windows 10's faster first-run experience. Once I got the machine finally setup, it was time to write down my initial feelings; these are the 'gut' impressions that many consumers will experience when they first touch the device at one of the many retail outlets that will sell the Surface 3.

A quick double-tap on the end of the pen does nothing; I forgot that you need to pair the pen with the tablet on first use. After pairing the devices, OneNote opened as expected and I started jotting my notes down.

The device was lightweight, had no scratches on the exterior and felt well built; the kickstand snapped with a triumphant 'smack' as it hit the back of the tablet when closing. Writing on the Surface 3 is a pleasant experience; it simply works - no fuss, no trying to figure out how to write... double tap the purple button on the pen and away you go.

Just like the Pro 3, the Surface 3 picks up your palm on the screen and allows you to write in the most natural way possible, aside from using actual pen and paper. If you haven't tried a Pro 3 or 3, the inking experience, as Microsoft calls it, is likely the best in the industry for tablets; I love it. 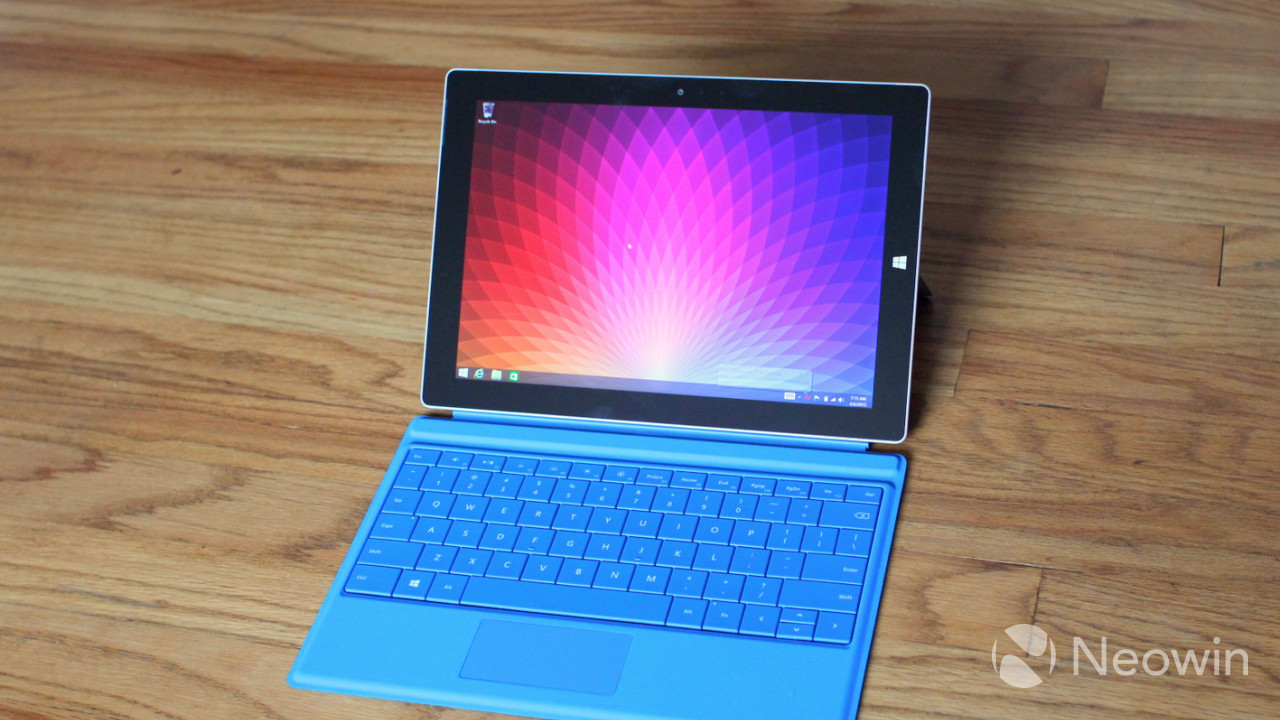 Even better, unlike the Pro 3, using the Surface 3 in portrait orientation works well. The smaller footprint of the devices makes holding it like a traditional notepad possible. I will say that I only used this orientation for writing notes and not browsing the web, as I believe that landscape is a much better orientation for that process.

Pulling the new Type Cover out of its sleeve and attaching it to the 3 gives the satisfying click that is reminiscent of a luxury car door closing; there is no doubt the device is attached and will not be going anywhere until forcibly removed. With new updated keys and trackpad, the Type Cover looks the same but it has been subtly refined.

With the device charged to near max capacity upon arrival, I did the most annoying and cliché thing possible: I went to a coffee shop for a meeting.

Unless you see the two devices side by side, you don't notice the smaller footprint of the 3, in fact, I think I might prefer the smaller size over the Pro 3 but I do miss the Pro versions kickstand. The 3's kickstand only has 3 stopping points whereas the Pro 3 has an unlimited position hinge. It's not a huge deal for new users but if you are going from the Pro 3 to the 3, you will definitely miss this feature.

I hit the coffee shop, talked about Tracour and headed back home, not exactly a grueling test for the Surface 3 but it worked well for note taking, demos, and basic conversation points; the battery easily lasted the entire two hour conversation.

At the coffee shop, we sat outside and the screen was bright enough to be seen easily, but there is no question the glare on the screen was a bit overkill. 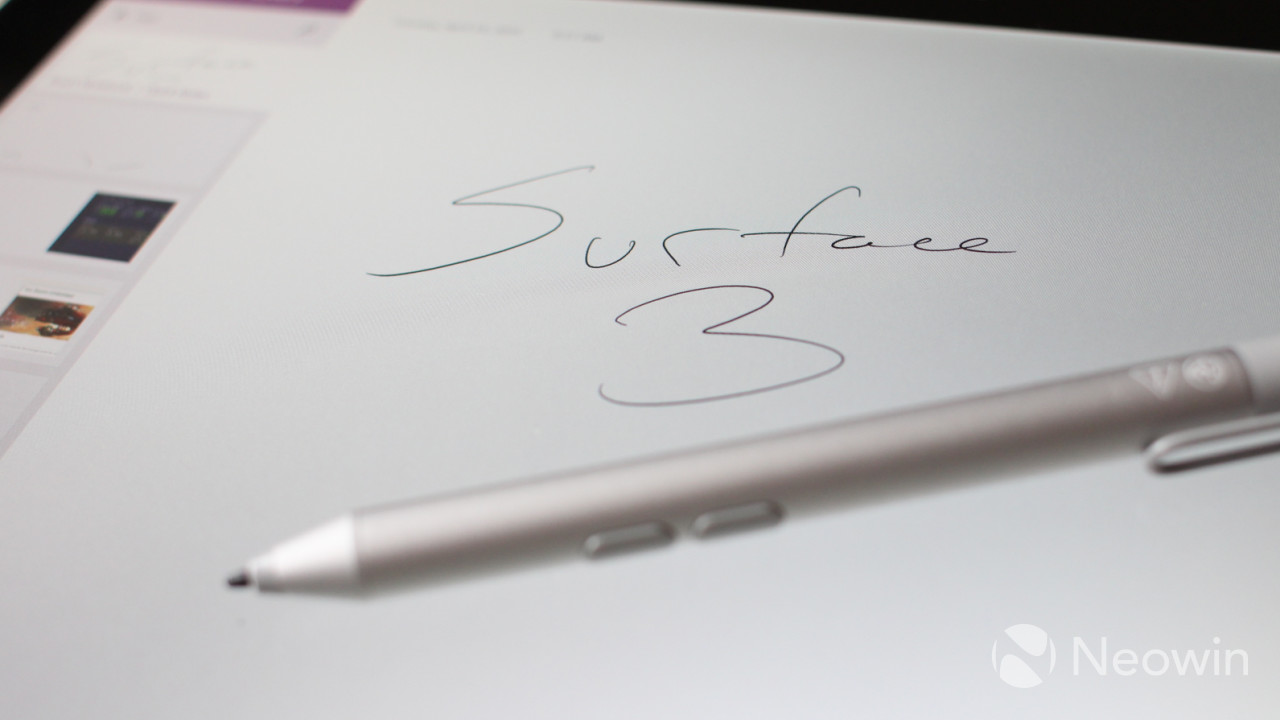 When thinking about the 3, it's clear the device is not a powerhouse in terms of performance, but it runs Excel, Word, PowerPoint, Internet Explorer/Chrome just fine, and it gives you plenty of options on how to use the device. The tablet runs the full version of Windows 8.1, meaning you can run any application, but I would not recommend Photoshop or Visual Studio; it's an Atom chip after all (check out detailed performance data here).

One thing you will want to keep in mind is performance over the long term. If you are buying this device for a student, you would reasonably expect it to last four years. How the Atom chip will fair in four years from now is a tough question with a significant amount of uncertainty. On the other hand, the Pro 3 with its Intel Core iSeries chips, will likely perform much better four years from now, so it's a tradeoff of cost versus long term performance that you should think about when comparing these two devices. Sitting down at a local park with the Surface 3 brought about all the same issues that the Pro 3 has, to no surprise. After all, they are the same form factor so it's not a shock that using the 3 on your lap with the Type Cover still falls short of a true laptop experience, and the keyboard, while better, is not as good as that of the XPS 13. But if I put the 3 on the picnic bench, and not on my lap, the experience is improved, but the touchpad is tiny and prone to accidental input.

Then again, the Surface 3 feels more portable than even an ultra-portable. The smaller size is, frankly, fantastic. I really like what Microsoft has done here with following the Surface Pro 3's aspect ratio and going with a 10.8in screen. The pen and keyboard should be considered essential accessories, so keep that in mind when buying the device.

The question often asked is whether this is a tablet, a laptop, a hybrid, two-in-one, or some other stupid marketing term. Simply put, it doesn't matter. The Surface 3 is a device that works in nearly all arrangements, and sure, you have to make a few sacrifices in some situations, but damn, I think Microsoft finally gets it.

The addition of USB charging makes it easier to grab and go, as you don't need a proprietary cable, the USB 3 port means I can leave the dongles at home, and the battery life (running 8.5hrs average over the two week time period) gives me enough flexibility to work without worry.

It's a little after 10 PM as I finish up this review, daughter is fast asleep, wife has checked out for the day and I sit here and look at the Pro 3, 3 and Dell XPS 13; tomorrow brings another long day of meetings. When I wake up, the choice will be tough, as all of these machines excel in different areas - but being the biggest or the fastest is not always the best for every situation.

So when I head out the door to take my daughter to school and then go to my meetings, I'll be grabbing the Surface 3...not for this review, but because it has proven to be a great machine.