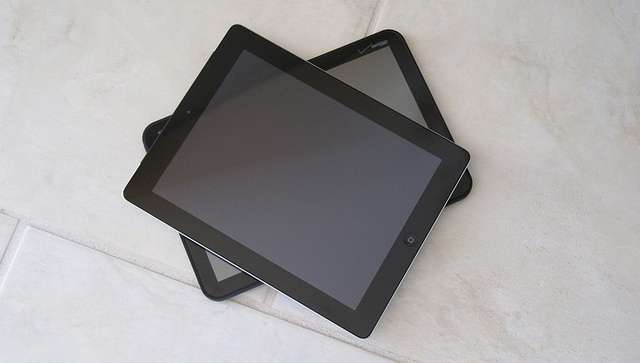 If you are looking for a tablet, the two top contenders are the iPad 2 (read review here) and the Xoom (read review here). Both of these tablets have similar specs and pricing and are close enough that they will typically end up on your short list. But if you are only going to buy one tablet, deciding on Xoom or iPad is not an easy choice. Each have their own unique strengths, but at the end of the day, only one can be the winner.

The chart above shows the two devices side by side at a quick comparison and there is not much difference. The Xoom does have higher resolution screen and a larger screen size, but also weighs more than the iPad and is a bit thicker. The differences between the two devices are moot and should not be a sole factor for purchase of one device over another.

Starting from a cold boot, the iPad 2 is considerably faster than the Xoom. While the iPad 2 does show that it is quicker out of the gate, the likelihood of consistent rebooting on a tablet device is relatively low. Sure you may do it once in a blue moon, but cold reboots are not a daily occasion.

As I said in the Xoom and iPad 2 review, the Xoom cameras are decent and the iPad's are sub-par; the iPad cameras are consistently washed out and grainy. It is clear that Apple cut a few corners when selecting the camera for the iPad 2 and the picture above clearly shows the end result. 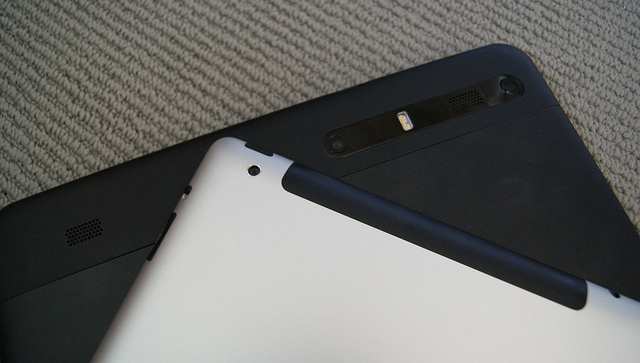 The browsers are another hot topic in the tablet debate and this one is a true toss-up. Each browser has their strengths here, the iPad feels more finger friendly than that of the Xoom but the Xoom feels more aligned to a desktop class browser in look and feel. It is hard to describe which one is better, but in reality it's going to be a personal choice. The good thing is, no matter which browser you choose, they are both solid solutions.

If you are looking for a hardcore fact comparison about the two browsers you can see from the chart above that the Xoom browser does eek out ahead of the iPad 2. But the small difference again shows that these two tablets are equally matched in many areas, a consumer is unlikely to see a difference between the browsers on a day to day basis. We should point out that the Xoom will support Flash later this month, while the iPad will never support Flash.

Battery life is vital part of any tablet. If you fail to deliver on this front, any tablet is going to be marked down considerably. Besides, who wants to always be looking out for their next outlet to recharge, it is all about using without remorse. If you cant use the product the way it was designed, then the vendor has failed. Fortunately for both Apple and Motorola, the battery life of each device is plentiful. But the iPad did best the Xoom by over an hour which gives it the clear advantage. Both tablets were used in a similar fashion for this testing (YouTube, email, Twitter, Facebook, Pandora). 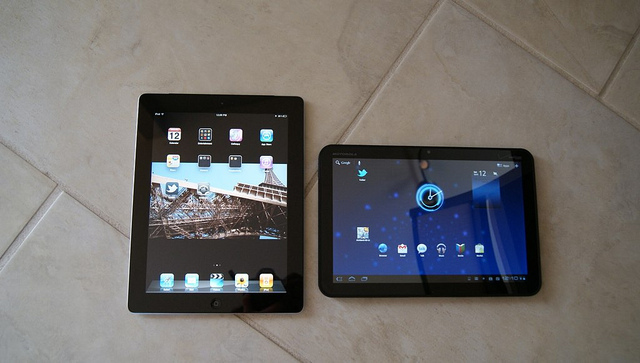 The software experience is what defines these two tablets. As I have previously said, hardware is ubiquitous for tablets. If the hardware is nearly identical, the only separation is the OS. If you want a deeper description of each OS, see the individual reviews, but for the sake of comparison, the iPad easily wins this category. While the Xoom OS (Honeycomb) is not bad, it still has a ways to go to compete with iOS in fluidity and App add-ons.

Both of the tablets provided have the same WiFi connectivity as well as a Verizon 3G chip; average download/upload speeds net-out on 3G. Neither one has a distinct advantage when working over 3G but the Xoom does have 4G capability (this comes via a future free upgrade from Motorola). It is a bit dumbfounding why Apple did not include an LTE chip in its iPad, especially since this device is supposed to compete on the market for an entire year. For this battle, the Xoom takes the cake as 4G offers a massive speed advantage compared to 3G

Apple is known for their build quality and the iPad is no different. The Xoom is also handsomely built too, but when you put the two tablets side by side, the iPad takes the prize. It is not because the Xoom is poorly made, that is far from the truth, it is that compared to the iPad, the Xoom feels thick, like really thick. The best analogy that I could come up with is that the iPad feels like a sheet of paper while the Xoom feels like an entire notepad. There is a fit and finish to the iPad that is unmatched by any tablet on the market today and while the Xoom does feel solid, well built, and looks handsome, it falls second class to the iPad. 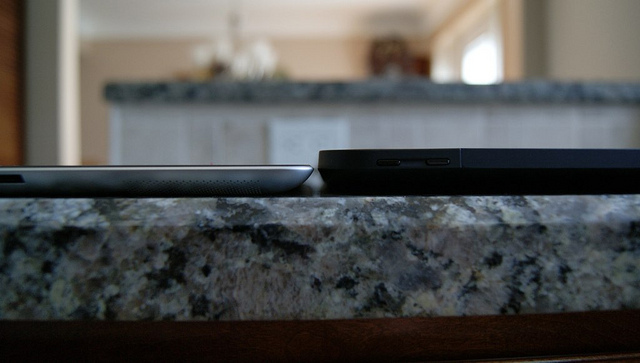 At the end of the day, there can only be one winner, and the crown stays with the iPad. It is not about the individual components that make up the iPad, but the entire ecosystem around it that makes it the winner. While the Xoom has the Android marketplace, it is still in its infancy; Honeycomb works well on the tablet too, but still needs a bit more polish to compete 1:1 with iOS. If you buy either tablet, you will be happy with your choice. Neither of these tablets are going to disappoint the consumer, but iPad users will get the overall better tablet experience.