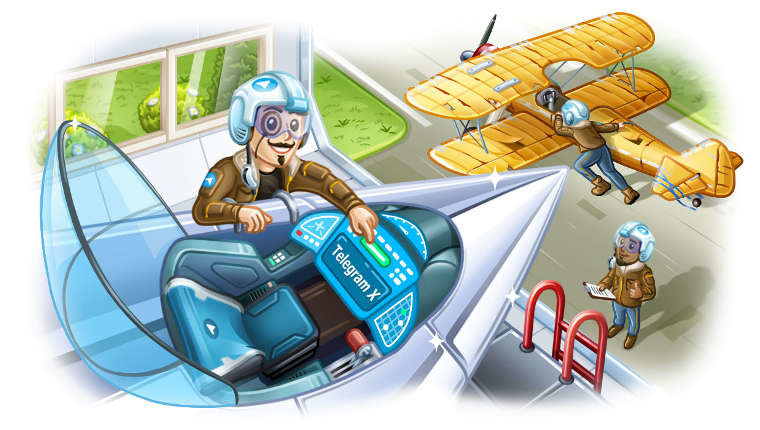 Telegram has launched a new app for Android called Telegram X as part of a wider project of the same name. The company explained that third party clients weren’t innovating fast enough so it set up Telegram X internally to give itself some competition and invent new features more quickly. Telegram X apps are written from scratch and feature an entirely new code base without the legacy components that its older apps have accumulated over the years.

Telegram X for Android is available for download right now from the Play Store and has already been downloaded between 100,000 - 500,000 times since it launched on January 31. The company says the app is experimental and that it may or may not replace the existing official app, but if it doesn’t it’ll still speed up the development of Telegram by allowing the firm to “quickly test new approaches and technologies.”

Discussing the motivation behind Telegram X, the company said in a blog post:

“Our mission is to make Telegram faster, slicker and easier to use with each passing month. Competition is the soul of progress, so at first we got plenty of inspiration from other messengers that spurred us on. But as years passed, we saw less and less innovation coming from competitors, who now seem content merely to adapt Telegram features to their platform with an average lag of two years.”

So what’s new? Quite a lot actually. Telegram X features an overhauled UI which includes two tabs, one for chats, and another for calls. Additionally, there’s a clean bubble-free mode for chats where messages and photos are allowed more space within chats. Several new swiping gestures have been added to chats, for example, if you swipe right on a message you are able to share it and if you swipe left you can reply to it. The new gestures take some getting used to if you’re used to swiping in the chat to exit back into the main menu.

Previews have been added in this version of Telegram; simply tap and hold on any chat to preview its contents without opening, this works everywhere including in the forwarding and sharing menus, as well as in the calls tab and ‘Groups in Common’.

Other features include a reimagined music player and attachment menu, and optimised profile pages with quick access to shared media. Going forward, new features are expected to land in the next week, and we should also see an iOS release quite soon.

Prior to the release of Telegram X, the company was already including new features in the main Telegram client at a blistering pace, with new point releases being pushed out every month or so. Notably, Facebook’s WhatsApp has copied some of Telegram’s features including the live location sharing. With Telegram X, which appears to be innovating at a quick pace, it’ll keep the pressure on WhatsApp.