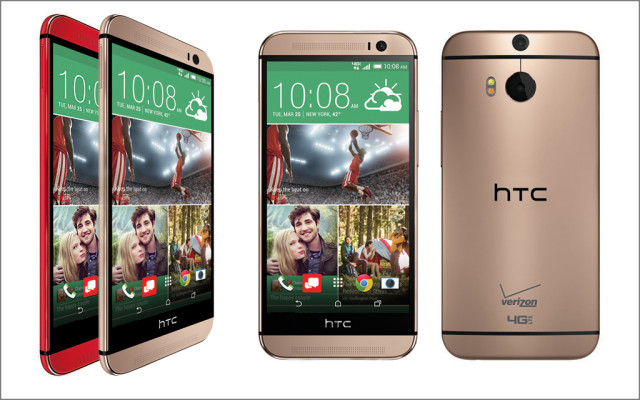 Verizon has announced a special deal for anyone looking to buy the HTC One (M8) for Father's Day, or just for themselves. Starting on June 5th, HTC's flagship device will be available in two new bright color models: Glamour Red and Amber Gold. And as added incentive, any phone over $199 on Verizon, including the HTC One (M8), is getting a $100 discount with a new two-year activation.

This means that, excluding contract fees and additional options, Verizon users can score a bright red HTC One (M8) for just $99. But the deal also extends to other phones on the Verizon network, including the popular Samsung Galaxy S5 and the Nokia Lumia Icon.

With the two new color options from Verizon, the HTC One (M8) now comes in a total of four colors, including Gunmetal Gray and Glacial Silver. And although HTC made official a cheaper, plastic-bodied version of their flagship phone last month, the $100 discount on Verizon means customers may not have to stray from the all-aluminum body or high quality construction of the One (M8). Color options may still have room to expand, too: if the predecessor HTC One is any indication, HTC could roll out additional color options in the future, including Stealth Black and Electric Blue, which makes the One (M8) a very competitive smartphone for an on-the-rise company which was fledgling just last year.