We learned back in February that Apple has been working on redesigning its upcoming 2021 iMac lineup too like it is doing so with its other Mac products. And that's because Apple is expected to be using its own ARM-based M1 processors in its new iMacs as well. The two models, which are the 21.5-inch and the 27-inch, respectively, are reportedly codenamed J456 and J457 according to a report from Bloomberg.

However, last month 9to5Mac discovered a couple of new Apple iMac device IDs dubbed "iMac21,1" and "iMac21,2" in the macOS Big Sur 11.3 beta update. While we do not know for sure if these new IDs are the same as those stated in the Bloomberg report, what we can say is that a Geekbench run of the iMac 21,1 model was spotted today by a Twitter user who aptly calls himself 'Leakbench'. While leaked Geekbench scores themselves aren't always reason enough to get excited over, what really caught our attention is the bizarre and uncanny processor that is seemingly powering the system.

The iMac 21,1 seems to be powered by an "ARM Qualcomm" eight-core processor however, it is being detected as a Genuine Intel CPU. The motherboard too is seemingly being detected as an "Intel Corporation iMac21,1". The test was conducted on the macOS Big Sur 11.1 build 20C69. 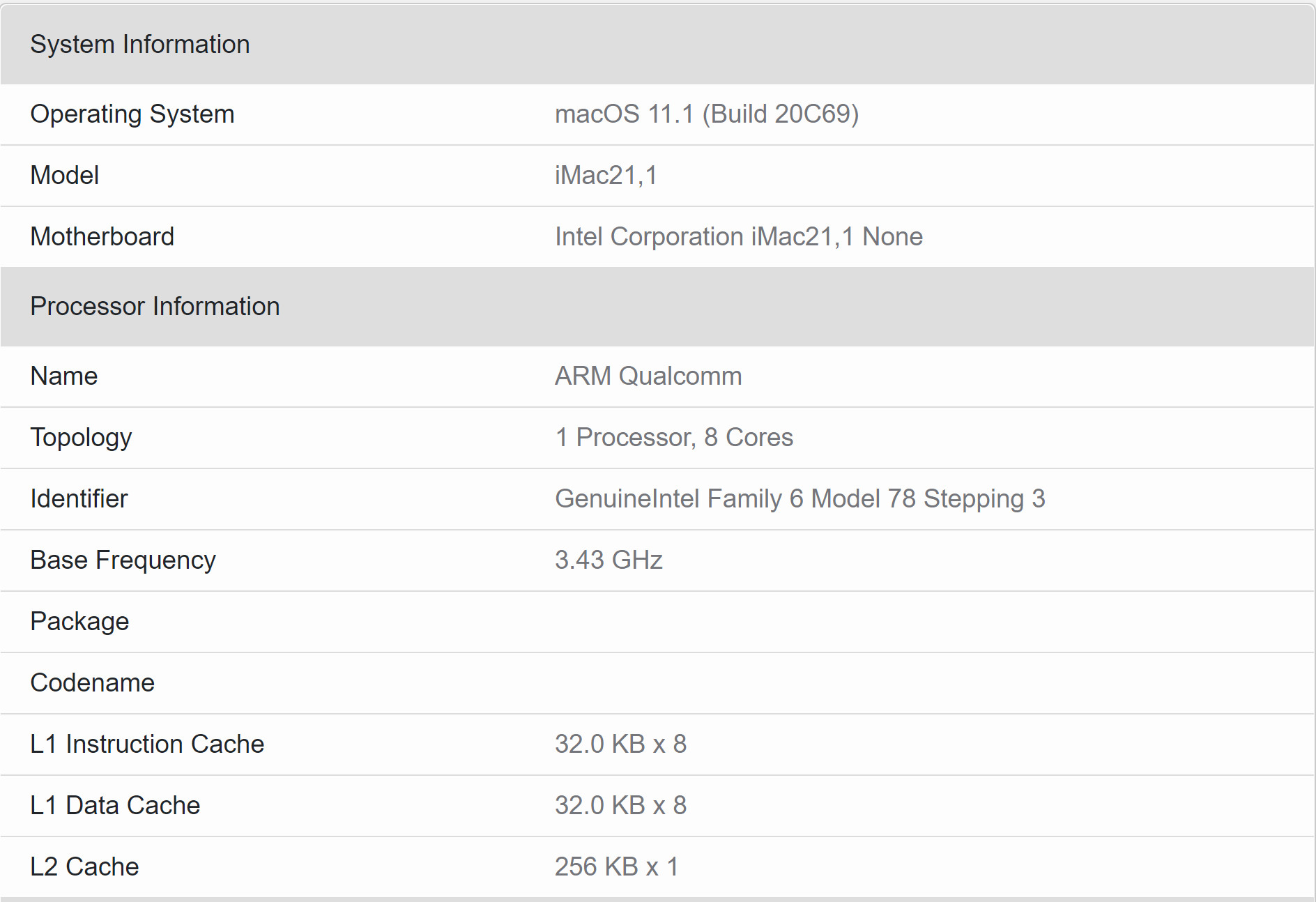 Geekbench often reports clock speeds incorrectly so it's best not to look at that to determine final specifications, however, other details like the cache amount or cores are more reliable numbers and are much more unlikely to ever change. The processor appears to be an octa-core ARM chip just like Apple's own M1. However, The M1 which is reportedly powering this year's 21.5-inch iMac model vastly outperforms this unknown CPU in Geekbench with nearly double the scores suggesting that the iMac21,1 may be a different product entirely.

But it must be said that we are talking about a potentially unfinished part and probably best not to look too much into these numbers. Regardless, here's how the new weird CPU has performed.

Apple is set to hold its Spring event in four days on April 20 and it's possible that the company talks about the upcoming iMac line. The 21.5-inch iMac seems to be running out of supply and that may be in anticipation to the arrival of next-gen models.