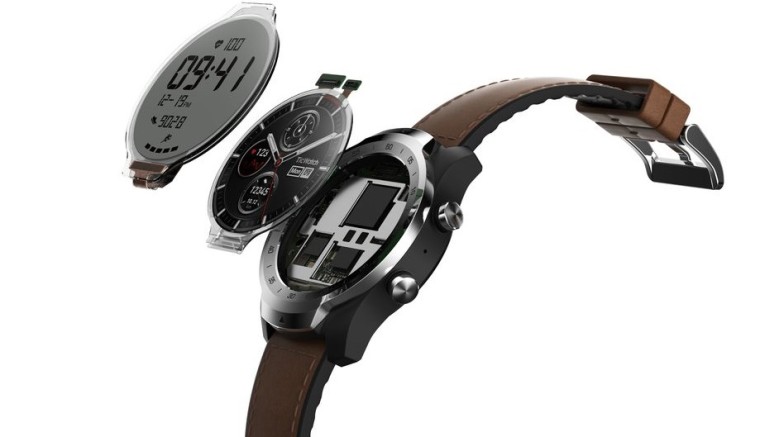 For the past few years, the smartwatch industry has been trying to replicate a lot of the features found in smartphones for the sake of convenience. But all the added functionality and complexity means that battery life is incomparable to what's found in traditional watches.

Mobvoi, a smart accessory maker - which you may remember from the crowd-funded Ticwatch S and E released last year - has announced a smartwatch which aims to fix this drawback, at least in part.

According to The Verge, the Ticwatch Pro will be a smartwatch with two displays, but you won't see them working at the same time. Instead, the two displays are placed on top of each other, with the top being a transparent display that only shows the time and some fitness information, such as the user's heart rate.

This transparent display uses a lot less battery than the OLED display underneath, which taps into Google's Wear OS for all the smartwatch functionality of the device, including NFC payments. The combination of displays is set up so that whenever the watch is inactive, the top layer display turns on to display the time much like a regular watch. Then, whenever the user interacts with the watch, the transparent display turns off and lets the underlying Wear OS shine, so users can access all their apps, notifications and more.

Using the watch in this dual-display mode results in what Mobvoi expects to be two days of battery life, which isn't all that impressive by itself. However, the Ticwatch Pro will let you disable the main Wear OS functionality entirely to allow for much longer periods (up to 30 days) of use without recharging.

Mobvoi calls this Essential mode and it still allows the heart rate monitor and step counter to function, but Wear OS features such as notifications will be disabled until the user boots into the operating system again. The company says it's working to add more features to essential mode, but no specifics were given.

The watch is expected to launch sometime this summer with a currently unknown price tag that should be under $300, but with a battery life of two days, it remains to be seen just how well the company has done to fix the problem it aims to solve with the Ticwatch Pro.

Source: The Verge via Liliputing