Despite being one of the most popular social networks in the world, Twitter’s search functionality hasn’t really been ‘up there’ as one of the best. Twitter seems committed to changing this, with an update having been announced on their official account entailing new account and content discovery methods.

As part of this evolutionary process, the search has been streamlined in a number of ways. This means accounts can be found and followed more easily as well; observe the result when ‘Neowin’ is searched. 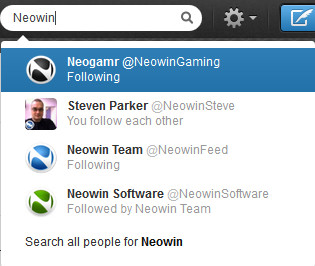 While it might not be as obviously apparent, images now also appear in-line with tweets, provided there are images to use. Obviously, this excludes photo hosts Twitter doesn’t really support: the image needs to be on Twitter’s own website for this to work.

At the time of writing the ‘search history’ is not shared across different devices, so searching on a phone does not add it to the web client’s history. While it likely won't affect most people, the two histories are independent.