Besides releasing new Windows 11 preview builds in the Dev and Beta Channel, Microsoft announced a much-needed improvement for the Phone Link app. It copies one of macOS's best features to make enabling mobile hotspots in Windows 11 much easier and faster.

macOS and iPadOS let you turn on the mobile hotspot without pulling out a phone—your iPhone's hotspot sits on standby in the list of available Wi-Fi networks, just one tap away. The same feature is finally on its way to Windows 11 by means of the Phone Link app. Open the network flyout and select your phone to launch the mobile hotspot feature without typing passwords or searching for hotspot settings. 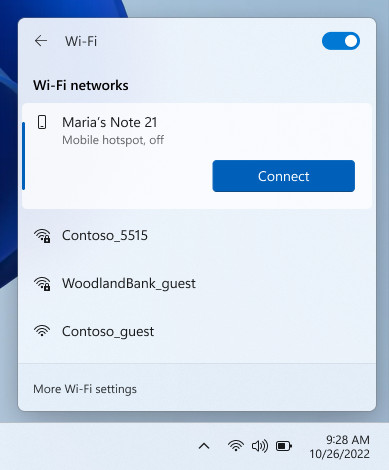 Unfortunately, like some of the best Phone Link capabilities, the instant hotspot feature in Windows 11 is available only to those having select Samsung smartphones. According to Microsoft, you need to the following:

Confusingly, the instant hotspot feature is not available even on Microsoft's Surface Duo smartphones with their latest and greatest Android 12L update containing all the Windows 11-like design bits.