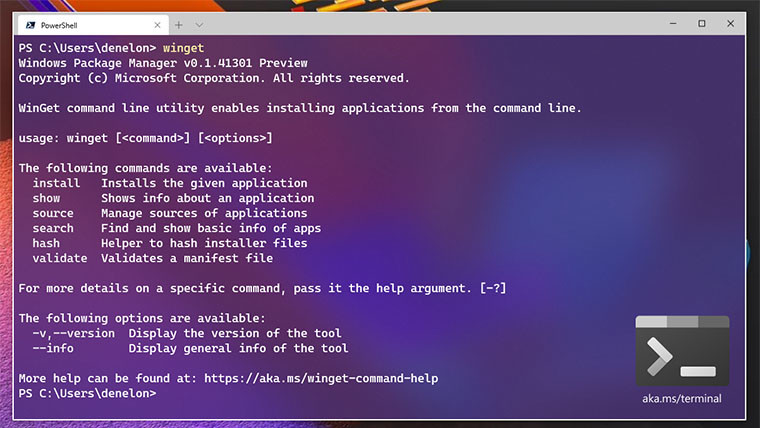 Microsoft has released a new version of Windows Package Manager - or winget - for users trying out the preview. This update brings it to version 0.3, and it includes a handful of useful additions, most notably the ability to export a list of your installed packages, as well as the ability to import a list so you can quickly set up all your apps in a new PC or installation.

Another new feature in this release is support for group policy management, meaning IT admins can manage the use of Windows Package Manager. You'll need to import the policies from an .admx and .adml file, both of which are provided in the releases page on GitHub.

Aside from those features, almost everything in this release is still considered experimental, but there are some noteworthy additions all the same. To enable each experimental feature, you'll need to add them to the JSON file as we described above for the export feature.

First, there's the list feature, which lists all the installed packages on your PC, including packages from the Microsoft Store and any apps you may have installed through other methods. Once enabled, you can use this by simply executing winget list. The export feature mentioned above will try to export all of these packages, too, but because a lot of them aren't on the winget repository, you'll see a lot of errors.

Next up is upgrade, which does exactly what you'd expect. It's a quicker way to update your installed packages, and it's used by running the winget upgrade [package name] command. Finally, there's a an uninstall feature that was announced earlier this year, which works the same way, and in this case, it doesn't even matter how you initially installed the app, winget will still remove it.

You can find a list of all the configuration names you need to add for each of the experimental features available on this page.

Looking forward, the Windows Package Manager team says its focus is going to be on highly-requested features, which right now include support for installing zip files, package dependencies, and native PowerShell support. The team is still working towards the first major release, version 1.0, and we can probably expect most of this to be added by then, though it's unclear when that will happen. If you're interested in trying out the preview, you can download it from GitHub or sign up for the Windows Package Manage Insider program, so you get updates for it through the Microsoft Store (through the App Installer listing). If you're running a Windows Insider build, you'll already be getting these updates, too.