After Microsoft launched its Windows Phone 8.1 Preview for Developers last week, one component of the update that got users particularly excited was a feature called ‘Project My Screen’.

However, that enthusiasm was soon tempered slightly by the news that the feature wasn’t quite ready for action, with users having to wait for the arrival of a companion app that would facilitate the mirroring of a handset’s display on a PC screen.

Now, though, the wait is at an end, as WMPowerUser reports. Matteo Pagani, an MVP for Windows Phone Development, tweeted to his followers that the PC application that enables the feature is now available to download from Microsoft’s servers.

Download and install the application on your PC and, when prompted, connect your handset via USB to the PC. Any requisite drivers will be automatically installed on your computer; a prompt will also appear on your device awaiting your confirmation that you wish to project your screen.

…et voila! You should see your handset’s screen projected on to your PC’s display. The app runs on the Windows desktop (rather than being a Modern app), and is full-screen by default - just press Esc to force the app into a windowed mode instead. 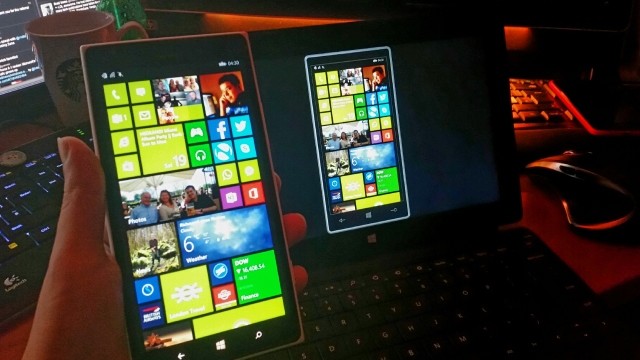 One particularly pleasing feature for those who have a PC with a touchscreen is that you can also interact with your phone via the PC’s display – tap the People tile on the PC projection, for example, and the People hub will open on your phone. Nice.

At the moment, Project My Screen works only over USB; Wi-Fi support is in the works, but there's no word yet on when it's expected to arrive. For now, you'll just have to be patient – but in the meantime, console yourself with the knowledge that good things come to those who wait.

Addendum: If you've followed all the steps properly, but you're still having problems getting Project My Screen to work, don't panic. Neowin subscriber +Heartripper spotted a very handy step-by-step guide over on Reddit for those experiencing issues, which should (hopefully) help you get it all up and running!
Thanks, +Heartripper!