While console gamers are synonymous with very strong opinions in regards to their console of choice, one sentiment remains unanimous among the majority - the XBox 360 controller is the superior controller on all of the systems. Many a gamer have wished they could use their 360 controller on their PS3. Introducing the XCM Cross Battle Adapter, an accessory that lets you do just that. The good news is, it works, and it works extremely well.

The XCM Cross Battle Adapter is Plug-N-Play. Literally take it out of the box, plug it into your PS3, plug your wired 360 controller into the adapter, and that is all you need to do. Once I started up my PS3, it recognized the Cross Battle adapter right away. I immediately was navigating the XMB with no issues at all. You can take the time to read the instruction manual the adapter comes with if you like, but no need, it says exactly what I just said above, and takes even longer to do so.

Once I saw I could navigate the XMB, it was onto the games. Minus one issue I will outline below, I had success with every game I tried out.

The one and only issue I had was out of nowhere the controller stopped working completely. I was actually in the options menu just seeing if I could customize the buttons themselves (which I indeed could do). I thought perhaps the entire system had frozen, but I fired up my official PS3 wireless as controller two, and I could once again navigate the game. I exited the game, went to the XMB, and the Cross Battle still was not working. I had to restart the system itself. Once I did that, the controller worked again. I thought I was in for a very long night of issues, but I was never able to replicate the controller not working again, even when I went straight back into the customize controller settings in Wipeout. As such, I am writing the issue off as a small fluke, as I never did see it again.

The thing is, Resistance 2 lets you customize the controller to your hearts content. Not all shooters do this on the PS3 unfortunately, as many developers know the shortcomings of the PS3 controller for FPS's and choose to map the buttons accordingly to make up for them. 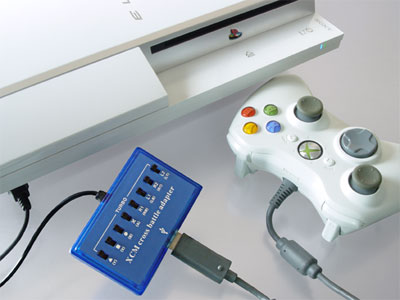 Overall, I am extremely pleased with the XCM Cross Battle adapter, and I believe anyone who plans on purchasing one will be as well, especially if you have longed for the day to play the PS3 with a 360 controller.

I have found them going for anywhere from $39.99 to $49.99 on a few various websites, which is indeed a bit pricey, but to some, the option to use the 360 controller on a PS3 has no price. I definitely recommend to anyone interested to shop around before buying one, and if you are still on the fence about doing so, waiting for the price to drop to $29.99, which I believe is indeed the suggested retail price.