You might know Zotac for their AMP!-branded custom graphics cards, or maybe their weekly eSports competitions, but they also build a number of mini desktop PCs that can cover many people's needs, with sufficiently powerful hardware in a package that doesn't take up as much space as a full tower PC.

The company will showcase its latest refresh of their mini PCs at the upcoming Computex trade show in Taiwan, so here's an overview of the updated models.

First up is the ZBOX Magnus EN980, which may not look like it, but it's a gaming PC crammed in a box that's a bit larger than other models (22.5 x 20.3 x 12.8 cm), which is still relatively small compared to a traditional desktop tower. The key focus here is performance, and this shouldn't be a problem (at least on paper) with the Intel Skylake i5-6400 CPU and Nvidia GTX 980 graphics card that are integrated in this tiny PC, which Zotac pitches as "the world's first VR Mini PC".

Last year EN970 showed great performance and thermal management, however, both components mentioned above are desktop-grade, whereas the EN970 uses a mobile CPU and a less powerful GTX 960. Zotac says that the EN980 uses "liquid cooling" to prevent thermal throttling, so we'll give them the benefit of the doubt.

This mini PC also features two DDR3 SO-DIMM slots for up to 16 GB of RAM and an M.2 slot for a fast SSD, as well as room for a traditional 2.5 inch drive. Connectivity-wise, it has support for WiFi 802.11ac and Bluetooth 4.0, as well as two USB 3.1 ports (one of which is Type-C), four USB 3.0 ports, and dual Gigabit Ethernet ports.

The left one you see above is the M-series, which can be considered the mid-range model, and features a slightly redesigned chassis with a matte black finish. It is smaller than the E-series model, and offers two DDR3 SO-DIMM slots for up to 16GB of RAM and room for a 2.5 inch storage drive, and you can opt for one of three variants depending on what CPU you want: the base MI523 has an Intel i3-6100U, or you can choose the MI545, which has the same i5-6300U that can be found in some Surface Book models.

In terms of connectivity, there's two USB 3.1 Type-C ports, two USB 3.0 ports, two USB 2.0 ports, and the same wireless capabilities as the E-series. The MI545 offers two Gigabit Ethernet ports, while the other two variants only offer one. Both the E-series and M-series mini PCs feature two HDMI 1.4 and two DisplayPort 1.2 outputs.

The C-series (the right one you can see above) is pretty much identical with the M-series in terms of specifications (and also comes in three variants), but it is slightly larger and uses passive cooling to give you a quiet PC. 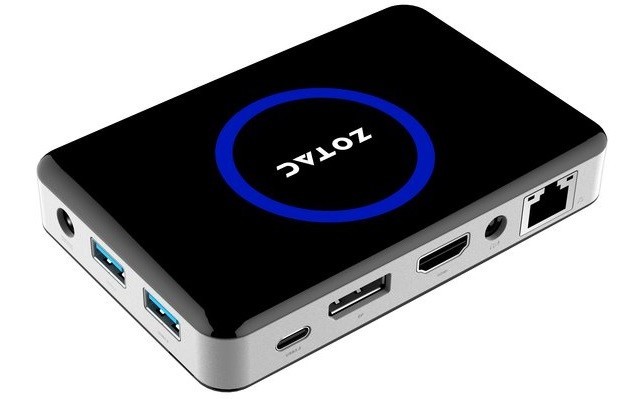 Their pocket-sized ZBOX PI330 is as small as two phablets stacked together, and features a Cherry Trail Atom x5 CPU - one of the last of its kind, considering Intel's recent "restructuring" - backed by 2 GB of LPDDR3 RAM. It offers a modest 32 GB of eMMC storage, but there's a microSD card slot where you can chuck something like a 128 GB SanDisk Ultra, or Samsung's new 256 GB EVO.

Despite being so small, the updated ZBOX Pico features both HDMI 1.4a and DisplayPort 1.2 outputs, as well as three USB 3.0 ports - one of which is a Type-C port. One has to wonder how such a tiny PC can offer so much more connectivity than a 12 inch MacBook.

Are you on the lookout for a tiny form factor PC? Let us know in the comments section.

Source: ZOTAC Via: The Tech Report