The blogosphere is alive with discussion about today’s announcements from Amazon, with many commentators and consumers in agreement that the company’s new products will have a profound effect on the e-book and tablet markets.

The introduction of a new, lower price point ($79USD) and refresh for the entry-level Kindle was a very welcome move, and the debut of two new touchscreen readers – one with Wi-Fi only ($99), the other with 3G and Wi-Fi ($149) – is certainly a logical progression in the Kindle story. The most dramatic announcement was clearly that of Amazon’s new full-colour touchscreen tablet, the Kindle Fire; at just $199, it significantly undercuts many other tablets on the market, even if it does without some of the features available on its rivals, such as 3G connectivity or an integrated camera.

Many users outside of the US will undoubtedly have been hoping for news that Amazon’s expanded Kindle portfolio, along with the tight integration of Amazon cloud and media services offered on the Kindle Fire, would signal a broader international availability of these devices. Unfortunately, a spokesperson for Amazon.co.uk told Pocket-lint that both the Kindle Fire and Kindle Touch will be available exclusively for the US market, crushing the hopes of British consumers intending to buy one of the new devices, and seemingly dashing any dreams of those in other markets that Amazon might be intending to officially launch Kindle hardware and stores in a wider selection of countries. The Amazon spokesperson did not give a reason for the company's decision to limit the new hardware's availability to the US only. 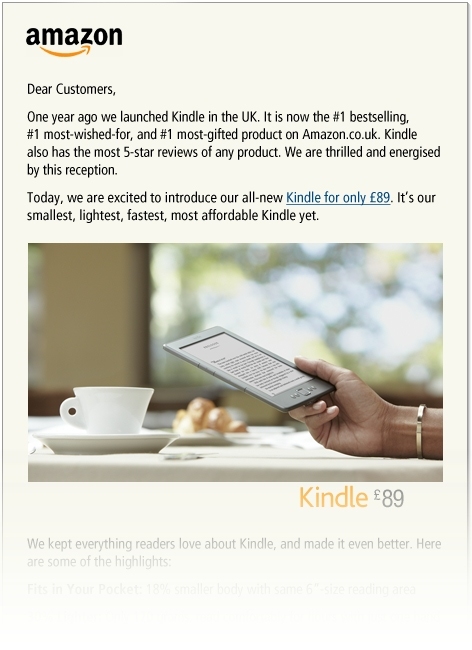