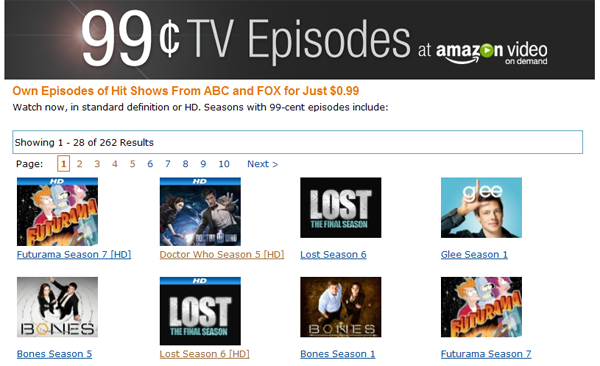 In an attempt to combat the 99-cent rentals that Apple now provides with their new Apple TV, Amazon.com's video-on-demand is offering TV episodes from Fox and ABC for only 99 cents. This comes at a better deal than Apple's rental, as for these episodes instead of renting, you are purchasing. The price is the same for both standard definition and high definition programming. Amazon's selection is quite large including TV hits such as Glee, Doctor Who, Lost, and Futurama, a full selection is available here.

While this is a steal for customers, Amazon may actually be losing money on this deal paidContent reports. Many of the complete seasons are available for $10 to $20, in HD and SD, which is cheaper than buying the DVD set which tends to retail for $20 to $40 on Amazon. On iTunes, Glee sells on iTunes for $49.99 in HD, while on Amazon the download price, still in HD, is only $21.78. In attempt to keep customers and in response to Apple's rental service, Amazon has started the project. For Amazon, they hope that more people will use their service which will then offset the potential funds they could have lost to iTunes for keeping higher prices.

If Amazon's gamble works out, then the company will have more users and downloads than they have ever had before. Hopefully for them, the potential loss they are taking now will pay out with more customers which would balance out any price cuts. Amazon is also looking to make a statement for other television studios to show that this cheap episode purchasing will work in the end, and hope that more studios will join ABC and Fox in allowing Amazon to offer programming for just 99 cents.