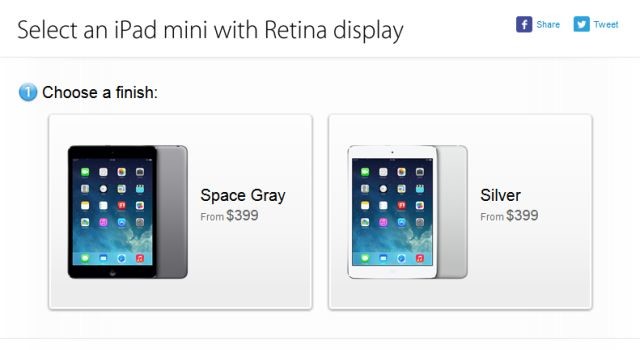 Apple announced their second generation iPad mini with a Retina display a few weeks ago but even company CEO Tim Cook admitted a few days later they were unsure of they would be able to meet the expected demand for the 7.9 inch tablet this holiday shopping season. Today, in a somewhat unexpected move, Apple started taking orders for the new iPad mini online.

As we have reported before, the new version of the iPad mini, which comes in "Space Gray" and silver colors, now has a display with a resolution of 2048x1536 along with the A7 processor that's in the new iPhone 5S and new iPad. The starting price for the iPad mini is $399 for the 16GB WiFi-only model all the way to 829 for the 128GB WiFI-4G version.

Thanks to +Mephistopheles for the tip in our forums!