20 years ago Capcom introduced the world to Bionic Commando. A classic side-scrolling 2D plat-former that was praised by gamers not only for its unique game play but for it's challenging difficulty level. It was definitely not an easy game to play back then (or in Rearmed if you checked that out), and perhaps as a nod to the past, the newly realized version that makes the jump to 3D is also not an easy game to play now. At least not for the first few hours.

Bionic Commando is pretty much the tale of two games. The first game is the first three or so hours, what I refer to as "an exercise in futility and frustration," and as you can probably guess by that description, it is not a good game. The second game is the rest of the game after that, and it is actually a pretty good game if you can make it that far past the first pretty bad game. 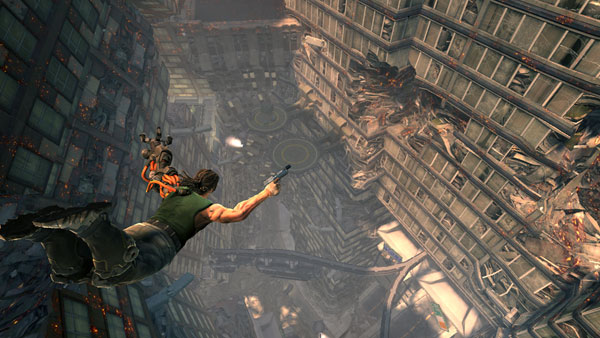 For starters, I will be dead honest and fully admit I did not pay much attention to the story at all. Truth be told, if there was a deep story-line, it was buried so far beneath cheesy dialog that I would use the time during cut-scenes to go refill my drink or take a bathroom break. What I can tell you is you are Nathan "Rad" Spencer, voiced by Mike Patton of Faith No More fame. Naturally since you are a bad ass leading man with dreadlocks, you have a chip on your shoulder and therefore are capable of saying witty one liners when you do something that is kick ass. I was able to gather that the organization you worked for no longer liked you for some reason, and as such you were sentenced to death. Some bad guys then blow up some bomb, and somehow you wind up back with your mechanical arm working for the same organization that had sentenced you to death even though they still dislike you and the feeling is mutual. Then of course there are the bad guys, and of course you have to eventually fight them since this is a Capcom published game and no Capcom published game would be complete without multiple boss-fights. But let's not get ahead of ourselves.

The very first thing you will notice right away about Bionic Commando is the gun play is really pretty bad. Your main gun sounds like a muted BB Gun at best, and your aiming reticule starts off as a huge circle that seriously takes up about fifteen percent of the screen. You can click in the right analog stick to aim, which then makes the reticule only about eight percent in size, but even then you are never really aiming precisely more than just aiming in a general area. Sometimes you will hit the person, sometimes you will miss them, it all depends on what the game wants to do. The reticule actually can get smaller as you progress through the game, but at no point, even towards the very end, did I feel that I was effectively aiming. As the game progress', you get access to better and more powerful guns, but you are always limited to using a sparse amount of ammo, so using the more enjoyable weapons is usually only a temporary pleasure.

As I indicated above, the first couple of hours of the game really are incredibly frustrating. It takes a lot of trial and error to really nail the swinging mechanic down to a point that you feel comfortable with using it. Ironically, the swinging is actually very much based on real life physics, but that is what makes it so hard to get used to. Most games that featured a swinging mechanic prior to this title provided a much more unrealistic, forgiving approach to swinging. If you let get at the very top of a swing, you will go nowhere. You have to swing during the apex of your swing, not after, and even with a graphical indication on screen for the optimal time to let go of your swing to get the most distance, it still takes awhile to truly get the hang of.

Naturally though, your arm is not only good for swinging, but it is also good for dealing out some punishment. You will do a tutorial very early on showing you almost all of the fighting moves you can do with the arm, but after that you will have to unlock the abilities by progressing through the game itself. Once you do unlock most of them, the game becomes way more enjoyable, as almost every single fight can and will be handled with just the arm. You can grab objects and people, then either swing them, jump kick towards them, or simply just smash them. It never gets old and is an incredibly entertaining and fun way of dealing with enemies.

One thing the game does incredibly well is present you with challenges to meet throughout the game. They can be as simple as swinging successfully once or killing two people, to as challenging as doing five speed swings in a row or killing six enemies with one grenade. A decent amount of these challenges you will do simply by playing the game, however some of them you will need to go out of your way to try and achieve. You can always view what challenges are currently active and how far you have progressed in a specific challenge by pressing select. Completing challenges will open newer harder challengers, but will also have some perks like extending your ammunition clip or providing better armor. Of course some of these challenges are also tied in with Achievements on the Xbox 360, so you will be hearing that ever so sweet achievement unlocked sound a lot while playing. To put things in perspective, I was able to get 505 out of 1000 achievement points without even trying.

I mentioned earlier the boss fights, and be well aware, this game has plenty of them. What are presented as major boss fights earlier on, actually wind up being smaller boss fights later on. You will also face some of the same bosses over and over later on in the game, usually in more numbers as well. Then of course towards the last twenty or so percent of the game (they do show your progress when you load from the main menu), you wind up facing no less than three different major boss fights. 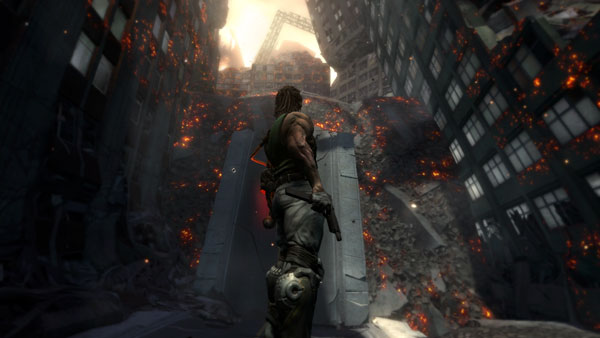 The game definitely has a few shortcomings, and while none are the end of the world, they all need to be mentioned. Sometimes the frames per second drop to a truly unacceptable level. It does almost exclusively happen in the larger outdoor environments with lots of action going on, but one particular huge boss that was outdoors, the frame rate was really, really bad. Like so bad, I actually thought that my 360 was about to maybe red ring. It just did not perform or look good at all.

Another huge issue is thanks to the nuclear bomb that was dropped, there are areas of radiation. These areas are actually the way the developer decided to implement invisible walls, so you may try to swing to an area you thought you could reach since you can see it, only to realize you are in a radiated area and die because you were not quick enough to get out. Speaking of dying, that is the final gripe I have with the game, and that is any collectible that you might have collected before you get to a checkpoint needs to be collected all over again if you die prior to getting to the next checkpoint. And do not confuse the way-points with checkpoints, as they are not always one in the same.

So if you are a patient person that can make it past the first few hours, Bionic Commando is actually a fun game to play. The final twenty percent of the game in particular offers a good amount of variety with its environments and definitely enough action to make it thoroughly enjoyable. I did feel it dragged on just a tad towards the end, as every-time I thought I was at the end of the game some kind of plot twist would happen to prove me wrong and then present me with yet another boss challenge. Overall though I was definitely pleasantly surprised with the game, and I do feel it is different enough with its approach that it is worth checking out. I should also mention it does have multiplayer that offers the standard Death-match, Team Death-match, and Capture The Flag, but I only checked it out briefly and did not find it to be my cup of tea. While I found it amusing, I do not see it having any kind of longevity whatsoever.

Bionic Commando is developed by Grin and published by Capcom.
It is available for the Xbox 360, PS3, and for the PC.
Official Site