It could be argued that wearables are still trying to establish mainstream relevance particularly when faced with the dominance of smartphones and, to a lesser extent, tablets in the consumer electronics space. Smartwatches and bands are simply not as essential nor have they truly found their 'killer app' that will have the masses clamouring for them.

However, another reason behind the tepid response to wearables in the market could be related to the user interface - specifically the touchscreen.

We have seen touch interfaces rapidly develop over the last ten to fifteen years to become one of the primary ways to interact with devices. Touch interaction, initially the staple of smartphones and tablets, has now found a place on laptop and desktop computers as well as televisions and interactive displays like Microsoft's Surface Hub.

Unfortunately, when you shrink a device down to fit on a wrist, usability can be negatively impacted: as the size of the screen shrinks the likelihood of fingers obscuring the view through touch interaction of the screen increases. 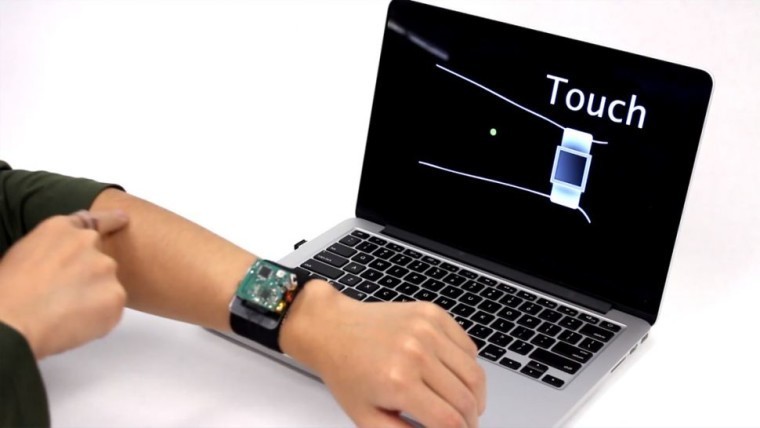 In response to this problem, SkinTrack has been developed by Carnegie Mellon University's Future Interfaces Group. It is a published experimental concept which allows your own skin to be used as an extended trackpad for a device such as a smartwatch.

The two primary components which enable SkinTrack to work are a signal emitting ring and four pairs of electrodes built into the sensing band with half each measuring X and Y axes movement of the finger.

The demonstration video shows a variety of use cases including launching apps and interaction with games. Button-based interfaces are also exhibited with the aid of hover locator on the screen. The final scenario featured in the video tests in-app scrolling with skin being used for alphabetic scrolling and the screen used for finer scrolling.

Whether or not we will see this technology turn up in wearables remains to be seen but the initial signs look promising particularly if input lag can be reduced with minimal impact to battery life.