Earlier today, you may have read our official review of the new Windows RT-based Surface tablet from Microsoft (and if you haven't, go ahead and do so). A number of Neowin readers have already got their Surface units in their hands, either by going to their local Microsoft Store or getting the device shipped to them via online order.

Our forums already has a lively message thread on the subject, "Anyone got your Surface yet?" It was started by "siah1214", who wrote he got his tablet on Friday. His first impressions?:

It's gorgeous. I love it. Touch cover is awesome, very easy to type on, I'm already up to 70-85 wpm (115-130 on a good day with a normal keyboard) Very high quality piece of work, quite fast, screen is AMAZING. Only gripe is it occasionally drops my home wifi and I have to reconnect. So, loving this, writing a post in IE10 metro with Netflix snapped to the side. Absolutely fantastic.

Neowin forum member "Sikh" gave his hands-on thoughts on the Surface. He stated:

Got mine this morning. Early too. I was so happy to see it but I was on my way to work. Grabbed it and took it to work and i love it so far. Typing on the keyboard is awesome. Im a lover of soft keys / touch when im typing. Only time I demand a push is gaming. So this works out really well for me. I would say im 40-55 wpm. To me it doesnt matter right now but I will most likely use this or my retina to type a lot for work(IT Field) and i think then ill get faster. Or naturally using it i will too. I will say i love the onscreen keyboard also. They did a great job.

"pupdawg21" is apparently thinking of ditching a well known tablet for the Surface he just received: He states in his message board post:

Received mine. Very sturdy and feels good in the hand. The screen looks great, the touch keyboard/cover is nice, thin, and responsive and it snaps in place easily every time and really does hold on tight. Browsing with Netflix/msging or any other single app snapped to the side is a great improvement over any other tablet I've used. I think I need to start looking into getting rid of my new iPAD since I haven't been using it much and this can pretty much replace it for the apps that I regularly use. 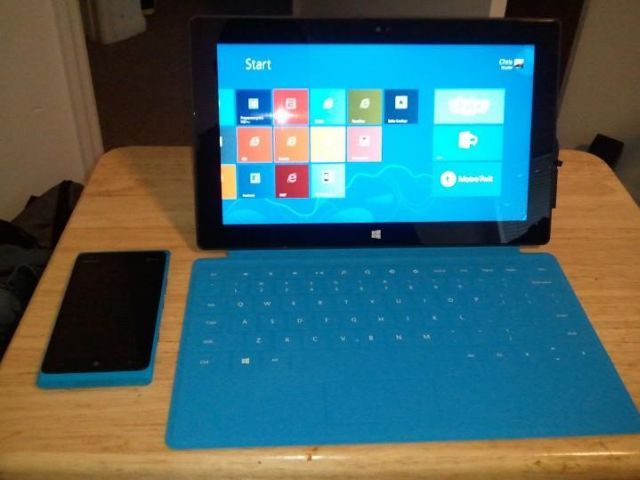 Overall, the forum posts on the Surface message board thread have been positive for the most part. A couple of Neowin members have already uploaded images of their new tablet. One of them is "Zedox" who placed his Surface with the blue Touch Cover next to his blue Nokia Lumia device. He says that these two devices are, "The best of buds."