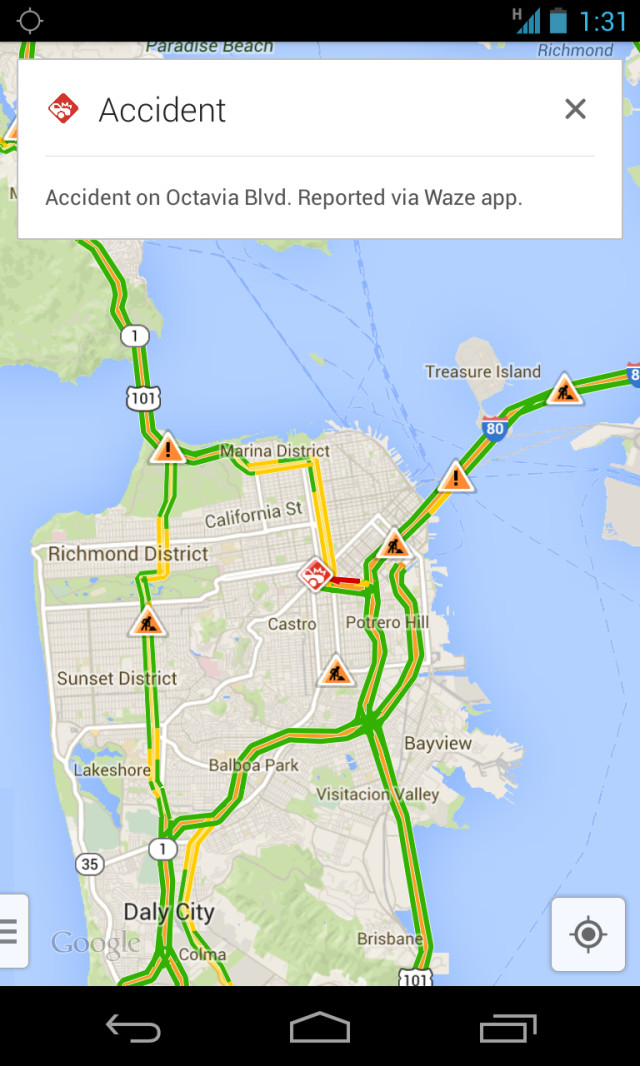 Google has finally started rolling out the crowd-sourced Waze traffic reports into Google Maps after acquiring the service for $966 million (£628m) in June. This means that when Waze users report accidents, construction, road closures and other incidents, the information will also appear in the Google Maps app for Android and iOS.

So far the service has been implemented in Google Maps for the following countries: The U.K., Argentina, Brazil, Chile, Colombia, Ecuador, France, Germany, Mexico, Panama, Peru, Switzerland, and the U.S.

No one likes getting stuck in traffic, that's why the Waze and Google Maps teams are working together to harness the power of Google technology and the passion of the Waze community to make it easier to navigate your daily life.

Google also added two new features to Waze for iOS and Android: Google Search for better results when navigating, and the Waze Map Editor now includes Google Street View and satellite imagery, which should make it easier to build out the map and correct errors reported by other users.

The Waze team also continues to work separately from their base in Israel, saying in a separate blog post that "The entire Waze family has been hard at work since joining Google, collaborating with the Google Maps team to explore best practices and make drivers' lives easier."

Additionally, the Waze team announced a beta test for Windows Phone back in April with a projected release over the summer. People were invited to join the beta test, which was then closed shortly after and disappeared altogether after the acquisition by Google. Ever since then members of the Waze community have failed to get an answer from Waze, which appear to be unwilling to comment on a release for Windows Phone.

Hardly surprising when you consider Google is involved, and their current (non) relationship with Microsoft; and if the YouTube app farce is anything to go by, it could be some time before Windows Phone users can enjoy the fruits of this service too.

Via: Google | Image via Google