When Google shipped out their Cr-48 netbooks to their selected fan base, they wanted to have people hack it, but probably only to a point. Hacking the machine so that it plays nicely with both Mac OS X Snow Leopard and Windows 7 probably wasn't in Google's plan of an open development stragety for device. Instead, actual users of Cr-48 netbooks have different plans, and have succeeded at them.

Two accomplishments came within rather a close period of each other, one Cr-48 was hacked to run Mac OS X Snow Leopard 10.6.5 and the other uses Windows 7. Both hacks require flashing a modified BIOS on the Cr-48's. On the Insanely Mac forums, damis648 who writes a guide on how to put Mac OS X on your Cr-48, explaining the reason for needing the modified BIOS is due to the fact that the BIOS the Cr-48 ships with works differently than both the legacy BIOS and standard EFI.

Damis648's guide and YouTube demonstration, as well as drasticactions' work to install Windows has revealed that the Cr-48 is a very friendly device to operating systems. Under Windows all of the hardware works, including wireless, except for the 3G modem, and everything works in OS X as well, except Sleep, hardware acceleration (QE/CI), and minor issues with the trackpad. 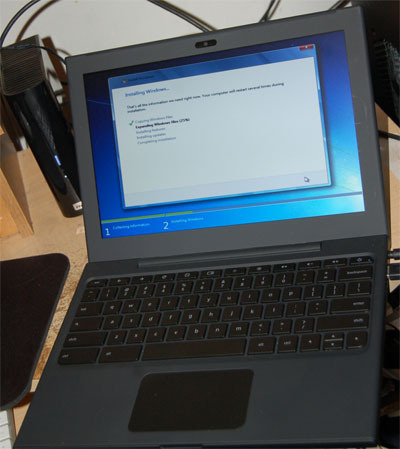 These two projects have shown the potential of these devices for hacking and modding, as well as hope in the future for a cheap alternative to purchasing, say a Macbook Air. Modifications needed on both ends were quite minimal compared to several other netbooks in order to get everything running properly.