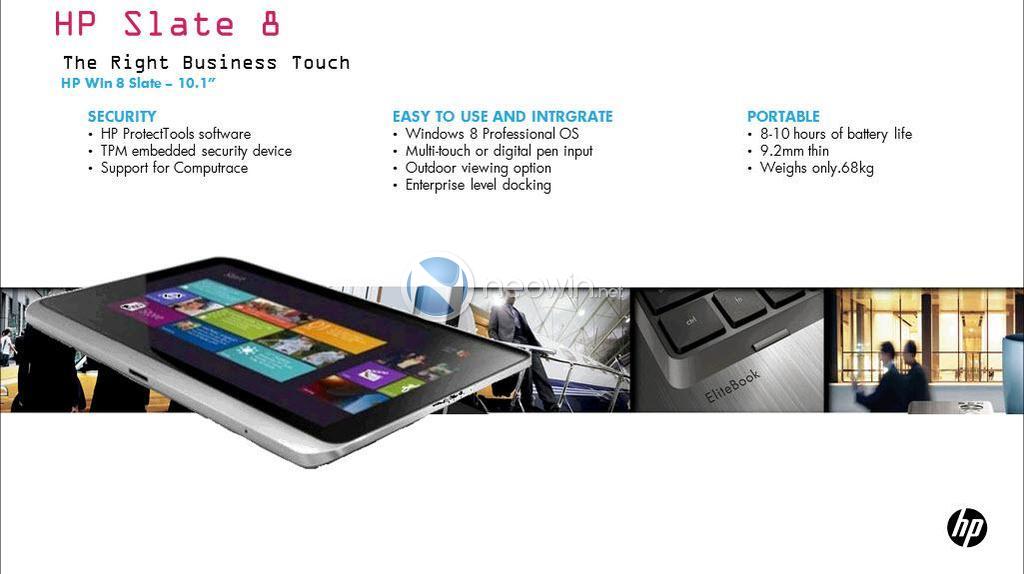 This time around we have some information from a trusted source about HPs upcoming plans for an x86 tablet that will be thinner than the iPad and have 8-10hrs of battery life with a 10.1in screen. What we are showing above is a rendering of the device that is currently going by the name HP Slate 8.

The device is targeted for businesses and as such, will not be using ARM based architecture. At this time, a release date was not given.

We know that the slide above is a bit rough around the edges but our source is adamant that this is a working spec list and the render above is an early mockup for the tablet.

We highly expect that many tablets will be hitting the market around, or not long after Windows 8 is released and HP will surely aiming to be a front-runner in this market.

To build on this further, back in February, CEO Meg Whitman said that it expects that the company will release its first x86 processor-based PCs with Windows 8 installed sometime before the end of 2012. The image you see above is likely a render of that device.

If HP can live up to the spec list above, the device will be compelling alternative to the iPad but one thing is not known and that is the price. If HP can position the tablet competitively, it could have a huge hit on its hands and avoid the TouchPad fiasco.