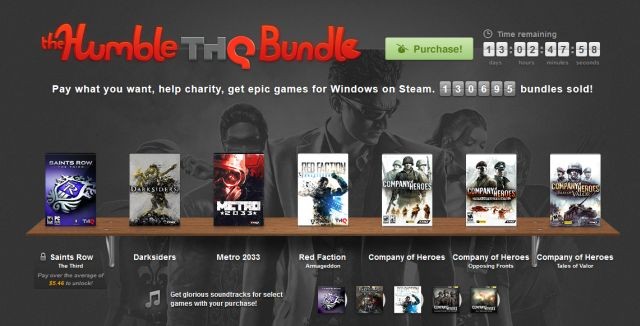 For the past couple of years, the team behind the Humble Indie Bundles have offers PC, Mac, Linux and even Android gamers a way to get a ton of great indie games under the "pay what you want" business model. Today that same team is launching its newest event, but this time it's tied into a major game publisher.

The publisher is THQ and for the next two weeks PC gamers (Windows only) will be able to get six games from the company for at least $1. The list includes three games in the Company of Heroes series, along with Metro 2033, Darksiders and Red Faction Armageddon. If a person pays more than the average amount, they will also receive Saints Row The Third as part of the bundle.

The team is also offering free soundtracks for five of the games in the bundle, along with a way to donate to two charities: Child's Play and the American Red Cross. Buyers will be emailed Steam keys when they purchase the bundle.

Since its launch earlier today, the Humble THQ Bundle has already generated over $760,000 in revenue, which is quite impressive considering the games in the bundle have been out for a while now.