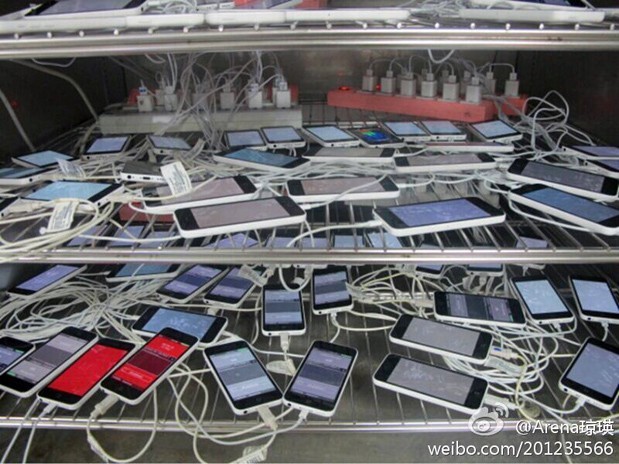 The upcoming low-end iPhone 5C is by no means a secret at this point. Apple, notorious for its secrecy, has done a very bad job of keeping the lid on this new handset, and we've seen countless leaks over the past months, showing pretty much everything there is to know about the phone. And now, we can add a group shot of a ton of devices to that list.

This image comes courtesy of a Sina Weibo user who apparently works inside Pegatron, an Apple manufacturer. Pegatron was mentioned a while ago in a recent China Labor Watch report as having incredibly bad working conditions and as being the place where's Apple new handset is being made so this image seems to be legit. The phones you see are clearly iPhone 5Cs and they seem to be undergoing some quality assurance testing, to make sure everything works well.

The iPhone 5C is expected to debut in September alongside its sibling, the iPhone 5S. There's no exact date yet, but invitations to a special Apple event should start showing up in digital mailboxes in the coming weeks. The 5C is expected to retail a lot cheaper than the current iPhone but if recent rumors are correct, the iPhone 5C may be more expensive than most people are hoping for.