Microsoft unveiled the Lumia 640 alongside its bigger brother, the 640 XL, last month at Mobile World Congress 2015. Since then, both devices have made their debuts in various markets around the world.

A few weeks ago, T-Mobile US added the Lumia 640 to its site, confirming that the low-cost Windows Phone would be 'coming soon' to its handset range. Just how affordable the device would be wasn't made clear - but Microsoft has now spilled the beans on that. 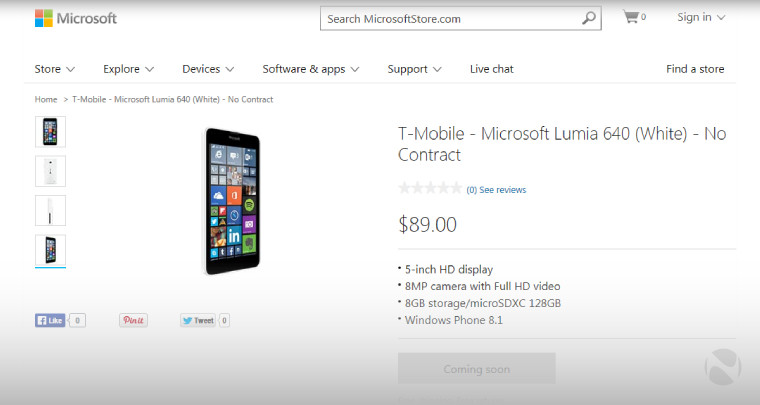 As Windows Central reports, the US Microsoft Store now carries a listing for the Lumia 640 on T-Mobile, and although it doesn't yet state when the device will be released stateside, it does confirm the price: just $89 with no contract.

Take a look through the handset's key specs, and you should get a sense of why that small price tag is such a big deal:

From the large high-def display and Snapdragon 400 processor, to the 8MP camera and 4G LTE support, the Lumia 640 has a lot to offer, especially at this price. The Lumia 640 also includes a free one-year Office 365 Personal subscription for your PC worth $69.99, adding even more value to the offering.

While there's still no word on when it will go on sale, its listing on the Microsoft Store suggests that there may not be much longer to wait.