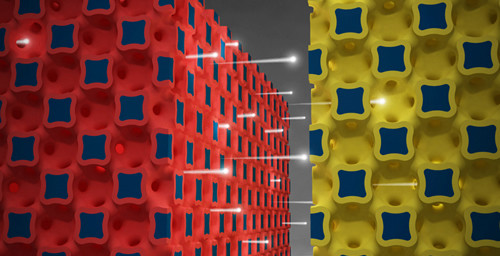 Ions flowing between the 3D shapes in the micro-battery

Batteries are by far one of the most important pieces of technology found in electronics today. Unfortunately battery technology hasn't evolved at the same rate as CPUs and memory and graphics and all the rest. As such we're stuck with limited battery life on our very powerful devices. But that may soon be a thing of the past thanks to clever folks at the University of Illinois.

The researchers have published a paper a couple of days ago outlining their work on micro-batteries. Their work is so exciting and promising that it might revolutionize the way we use electronics and make worrying about battery life a thing of the past.

They have developed a special kind of micro-battery which is approximately 30 times smaller than current batteries while offering the same performance. Or reverse that and get 30 times higher performance for the same size. And the battery can be recharged in a very small amount of time being much more similar to a capacitor than to a regular battery.

So how much performance can you get out of this? Well here's a quote from the original article: " The most powerful batteries on the planet are only a few millimeters in size, yet they pack such a punch that a driver could use a cellphone powered by these batteries to jump-start a dead car battery – and then recharge the phone in the blink of an eye."

Of course this has yet to hit any market but the team is working on getting it inside electronics so the future is definitely cool. If you want to read more about the project check out the original article at the source link. You can also read the entire paper outlining the technology here but it will cost you a few bucks.

Source: University of Illinois Via: Pocketnow