Earlier this month, EA announced its new subscription gaming service, exclusively for the Xbox One. EA Access provides users with unlimited game play of a selection of titles, for a monthly fee of $4.99, or $29.99 if you purchase a full year in advance.

The service launched as a limited beta with just four games, but EA recently promised that any titles that it adds to the service will be permanent additions, gradually growing into a much larger collection of games that can be played, with unlimited access for a flat monthly fee. 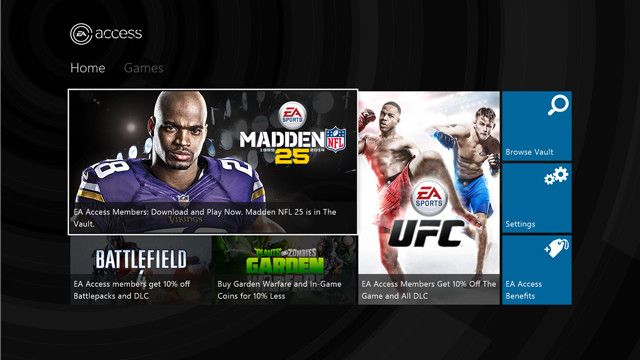 As Gamespot noted, senior Xbox evangelist Jeff Rubenstein spoke on Microsoft's latest Major Nelson podcast about EA Access: "That was announced last week," he said, "and is very much a game-changer."

Rubenstein added that he believes that "pretty much every [upcoming EA] game" will be eventually be available first, ahead of general release, on EA Access. Subscribers have already been promised early access to some upcoming games up to five days before they go on sale.

It is not yet clear when EA plans to open up Access into a larger public beta, or when it intends to launch the product fully. Nonetheless, EA Access is shaping up to be a pretty interesting offer, and Microsoft clearly feels the same way. Sony has said it does not believe that EA Access offers sufficient value to PlayStation users, so it looks like it will remain an Xbox One exclusive for the foreseeable future.