There are millions of people around the world on the Windows Insider Program, helping Microsoft to test previews of Windows 10, and suggesting improvements and new features - many of which are then developed and integrated into updates for the hundreds of millions of devices running the OS. But the company is keen to develop the program further, making it about far more than just getting early access to new OS builds.

In 2016, Microsoft launched #WINsiders4Good, an initiative to explore how the enthusiasts helping it to improve Windows 10 could come together to solve wider problems using its software and technologies. In October, for example, Microsoft hosted a 'Create-A-Thon' event in London, encouraging Insiders to consider how best to use Windows 10 and the company's app development tools "to tackle housing issues in our local communities".

Windows Insider Program chief Dona Sarkar said that initiatives such as these have proved extremely popular among Insiders, and that in 2017, the program will expand further on two fronts. In addition to making new Windows 10 builds available for testing and feedback, she said that Microsoft will be making a greater effort to bring the Insider community together, offering new insights into how the development process unfolds, while also encouraging Insiders to do even more to "use tech to make a lasting impact in the world". 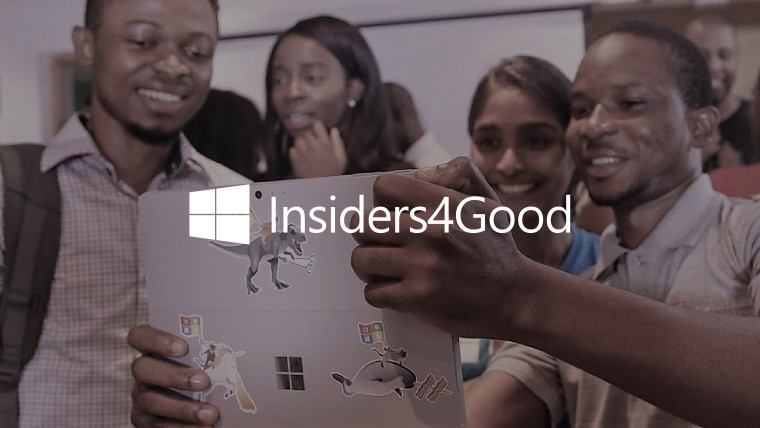 Recognizing that such efforts go beyond just Windows 10, the #WINsiders4Good campaign is now known as #Insiders4Good. Coinciding with that change, Microsoft has also launched a new blog, a home for the Windows Insider community itself.

The blog is "a way for us to talk to you," Dona said, "for you to talk to each other and for us to talk to the outside world about our various projects, passions, and challenges." She added that the Insider team at Microsoft has been "experimenting with ways for [Insiders] to communicate and collaborate" over the last two weeks, and that the new blog is just the first step in its plans.

The blog already includes guest posts from some Insiders and Fellows around the world, and those who wish to contribute and share their stories on the blog can email Microsoft via NinjaCatTeam@outlook.com.

But while the #Insiders4Good blog "will focus more on the community and projects aspect" of the Insider Program, Dona said that Microsoft will continue to improve its existing channels like the Windows Blog to keep Insiders informed on new builds and other developments, and to offer deeper and more frequent insights into how the program is managed. She explained:

Many of you want to feel closer to the engineering team and want more transparency into how we work. We love that and want to work even closer with you this year. We’ll work to give you more insight into what the team is doing, how engineering decisions are made, what issues we’re prioritizing each week, how we can improve our processes/tools and much more “behind the scenes” things. This will all start next week when everyone is back in the office on the standard Windows channels you know and love.

You can find out more about Microsoft's #Insiders4Good program on its site, and you can check out the new Insider blog via the source link below.