The Surface RT tablet has now been on sale for a week, and while Microsoft has declined to comment on exact sales numbers at this early stage, the huge throngs of people queuing to get their hands on the new device, along with widespread reports of models being sold out for several weeks in numerous markets, point to some pretty decent sales so far.

Surface is just the beginning of a new wave of hardware from Microsoft; CEO Steve Ballmer stated last month that MS is now a "devices and services company" and reaffirmed this in an interview last week, in which he asserted that Microsoft will indeed bring more hardware to market wherever the right opportunities are present.

This has fuelled speculation over what Microsoft might build next, and one suggestion that repeatedly gets churned out of the rumour mill is that the company is planning to build its own smartphone. With Windows Phone 8 hardware having just launched - and the Windows Phone 7.8 update just a few weeks away - it's perhaps not surprising to see the return of this story, this time from The Wall Street Journal.

It's claimed that Microsoft has been liaising with component manufacturers in Asia to test a new proprietary smartphone of its own design. The nameless sources at the parts supply companies claimed that Microsoft is putting the new device through its paces "but isn't sure if [the] product will go into mass production". One unnamed source - one of many "people familiar with the situation" - claimed that the device's display size was between four and five inches diagonally. 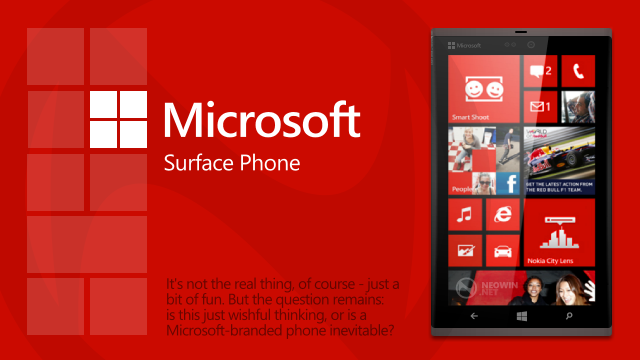 The most convincing end to speculation about a Microsoft-branded smartphone would be the news that Windows Phones from its OEM partners - including HTC, Samsung and, of course, Nokia - have sold in phenomenal numbers; such a scenario would leave Microsoft with little need to develop and sell its own phone hardware.

With the first wave of Windows Phone 8 devices only just going on sale, these are certainly early days. Whether it's true or not, we'll likely be hearing plenty more on this rumour for some time to come.


Source: The Wall Street Journal | via TNW
Image of 'Surface Phone' is purely illustrative and wholly speculative,
and not based upon any credible information regarding any such device.