Transparent displays are nothing new - at least as far as our awareness of them goes. They're often seen in sci-fi movies and TV shows as an obvious symbol of futuristic tech, and in recent years companies like Planar and Samsung have been developing this technology in different ways - but we're still a long way from these displays becoming ubiquitous in everyday life.

Most firms working on such displays are focusing on usage scenarios in business more than the home, and that's certainly the approach that Samsung is taking with the two 55-inch panels that it unveiled today. 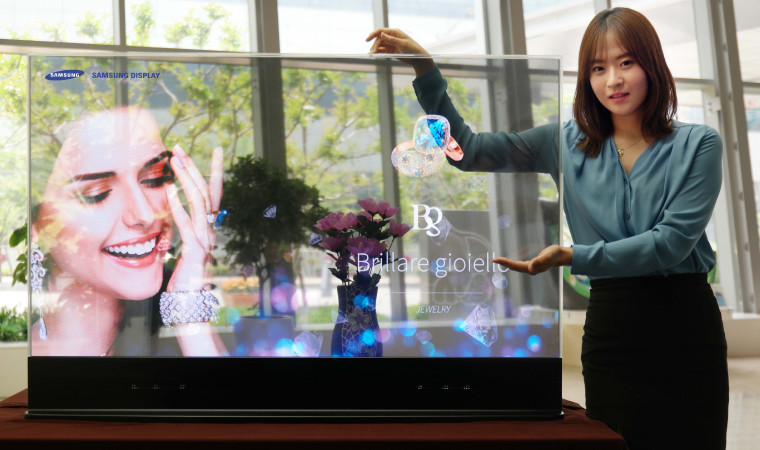 The Samsung Transparent Display offers Full HD (1920x1080px) resolution, along with gesture and voice controls, and Intel's RealSense technology, which uses 3D cameras to 'see' its real-world surroundings, including the people around it. This will open up new possibilities for interactive advertising or, as Samsung puts it, "to deliver highly differentiated, exquisitely personalized customer experiences." So... ads?

Well, yes - but the company says it also expects these displays to be used for innovative signage applications in public information and transportation environments". 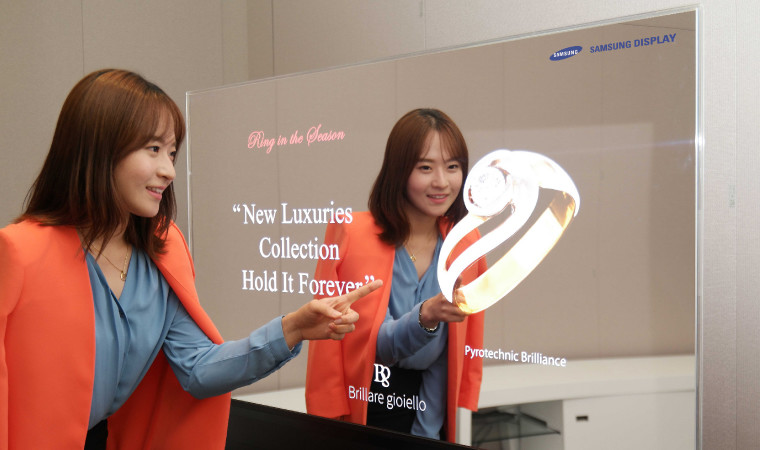 Based on the same underlying OLED technology, the second display that Samsung showed off today has a reflective surface, turning it into a giant mirror on which content can be shown.

Naturally, that makes it perfect for augmented reality scenarios - paired with RealSense, the Mirror Display could, for example, overlay clothes onto your body so you can see what they look like on you in a store without actually having to try them on. Samsung says that this "virtual fitting room... will greatly enhance point-of-purchase shopping as we know it today."

The company has also partnered with the Chow Sang Sang jewelry company to create the "first retail use of advanced commercial OLED panels" in the form of a 'virtual necklace' display, on which customers can 'try on' beautiful items of jewelry simply by looking into the mirror.

The company also suggests, in passing, that the Mirror Display "may also replace home mirrors in the future", but the focus for now is clearly on business applications rather than consumers. While Samsung didn't reveal pricing or availability details for the two displays it unveiled today, you can be sure they're not going to be within the price range of most consumers - and until the technology becomes more widely adopted, and prices begin to fall, that's not likely to change for some time.

Still, if you're looking for a big display with some cool features, there's always Microsoft's Surface Hub - pre-orders open in a few weeks, with prices starting at $6,999.