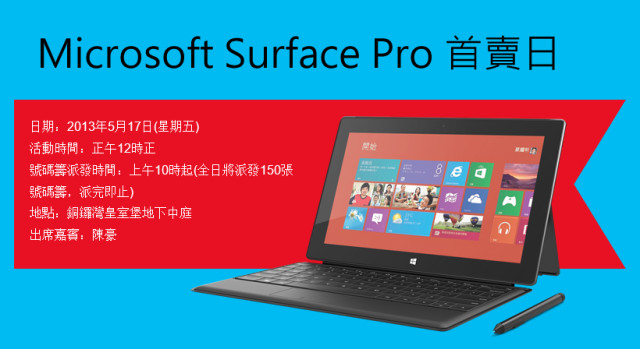 Microsoft started selling the Surface Pro tablet in early February in the US and Canada and added mainland China in early April, and Hong Kong is set to be the next territory to sell the Windows 8 Pro device.

Livesino.net reports that Hong Kong retailers will begin selling the Surface Pro on Friday, with the 64 GB version to be priced at HK$7,088 ($913), while the 128 GB version will be sold for HK$7,888 ($1016). There will apparently be some kind of launch event at Windsor House and the first 150 people in line will get a chance to win some free extras like a Wedge Mouse, a Surface Touch Cover and Office 365 subscriptions.

A few weeks ago, Microsoft indicated that the Surface Pro would start to go on sale in a number of new countries and territories before the end of May, including Australia, Austria, Belgium, Denmark, Finland, France, Germany, Ireland, Italy, Luxembourg, New Zealand, the Netherlands, Norway, Portugal, Spain, Sweden, Switzerland, and the UK. By the end of June, the tablet should go on sale in five more countries: Korea, Malaysia, Russia, Singapore, and Thailand. So far, the company has yet to give specific launch dates for those parts of the world.