As discovered by Resetra forum user Gemüsepizza, the latest release of Unreal Engine 4 contains a platform named "Erebus", alongside other known consoles like Xbox One, PlayStation 4, and the Nintendo Switch: 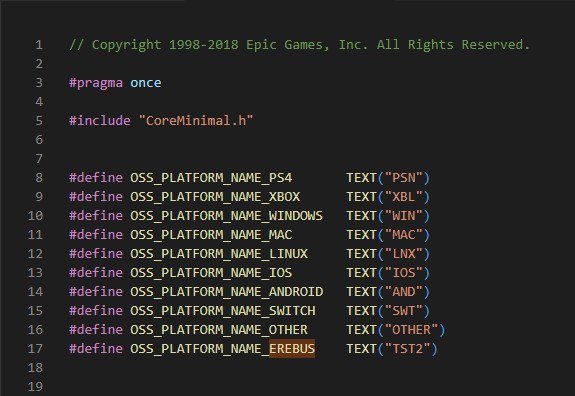 Other references to Erebus can also be found in the code, as shown below:

While it's quite possible that Erebus has nothing to do with the PlayStation 5, a source familiar with Unreal Engine's code told VG247 that:

It looks like it’s hinting at a new console. In engines you tend to have like a bunch of values to tell you which platform you’re on because they all need to run slightly differently. The whole Erebus being a god thing makes sense with the Sony codename branding.

The [first] screenshot is just the value being set. And the second one is a little bit of code that looks like it’s adding cross platform play.

Given that we know that Microsoft is developing its next-generation family of Xbox consoles - rumored to launch in 2020 - under the codename "Scarlett", it wouldn't be altogether surprising to find out that Sony is ramping up its efforts in the development of the inevitable PlayStation 5 too. That said, it'll likely be quite a while before new concrete information starts pouring in, so for now, we can just speculate regarding the meaning behind the name Erebus.

Do you think Erebus is the codename for the PlayStation 5? Let us know in the comments section below!