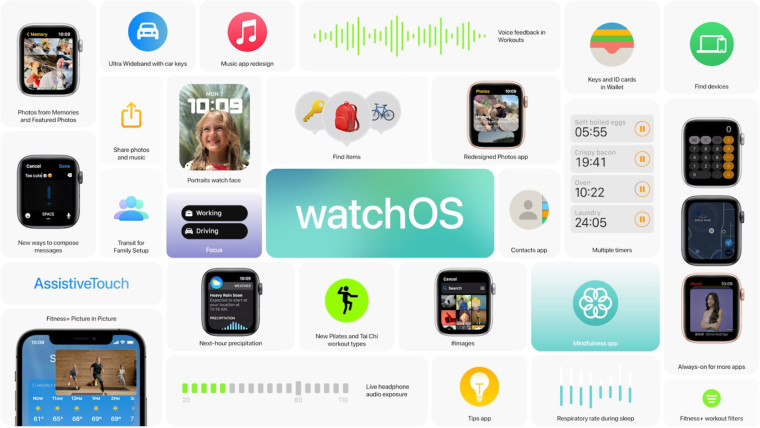 First up, the company has announced a new Mindfulness app that is an extension to the company's Breathe app and will allow users to relax. The app will also include new features and animations to help you relax. Apart from that, Apple is also introducing fitness routines including tai chi and pilates. The company is also adding a new feature that will track a person's respiratory rate and will notify them if it is outside a normal pattern.

Apple is also introducing a new watchface that will use photos taken via portrait mode and overlap text on it. The company will allow users to customize the text behind the image. Furthermore, Apple is also upgrading the Photos app on WatchOS. With the new update, users will be able to share photos directly through Messages or the Mail app.

Moving on, Apple has also integrated some of iOS 15's features into WatchOS 8. These include the new focus mode, next-hour precipitation alerts as well as always-on display support for Music, Maps, and Calculator. The new WatchOS 8 will also allow users to include emojis in handwritten messages and use the crown wheel on the side to move the cursor around when typing a message.

Lastly, Apple is also adding AirTags support to Find My allowing users to track their AirTags using the Apple Watch. Not only that, but Apple also plans to include car keys support to Series 6 Apple Watch that can utilize UWB (ultra-wideband) radio.

The WatchOS 8 Developer beta will be available for the eligible devices later today and the new WatchOS 8 update is expected to roll out to users later this year.