DJI has announced its newest entry in its Mavic line, the Mavic 3, as the successor to its Mavic 2 line launched in 2018. The Mavic 3 is receiving sizeable upgrades in almost every category.

The Mavic 3 still takes on a foldable form-factor like its predecessor but has received an upgrade to its camera system with a dual-camera system. The first camera is a 24mm Hasselblad L2D-20c camera which has a 4/3 CMOS sensor, 84 degree field of view, an aperture of f/2.8 to f/11 and ISO ranges of 100 - 6400 for videos and still images. The camera is able to capture 20-megapixel still images, and multiple video recording resolutions and frame rates including 5.1K video at up to 50 frames per second and 4K video at up to 120 frames per second. The standard Mavic 3 comes with 8 GB of SSD storage. The more premium Mavic 3, Mavic 3 Cine, allows for capture of Apple ProRes 422HQ and comes paired with a 1 TB SSD.

The second camera, a telephoto camera, can be activated by Explore Mode. The telephoto camera has a 162mm telephoto lens with an aperture of f/4.4, 1/2-inch CMOS, 15 degree field of view, and can take up to 12-megapixel still images.

Using DJI's ActiveTrack 5.0 for increased tracking capabilities, the Mavic 3 utilizes signals from GPS, GLONASS, as well as BeiDou satellites for improved performance. Equipped with a 200 meter range omnidirectional obstacle sensors coupled with APAS 5.0, the Mavic 3 is capable of safer navigation through environmental obstacles. The Mavic 3 uses an AirSense system to notify the user of aerial traffic such as helicopters and planes. 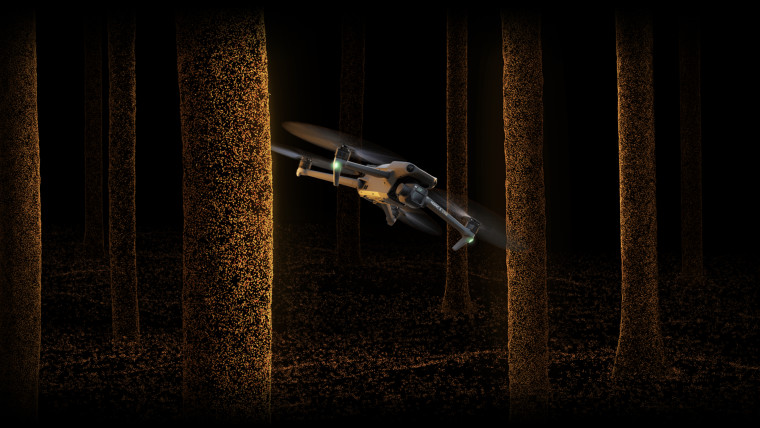 The improved batteries can provide for up to 46 minutes of flight time in ideal conditions, in part because the Mavic 3 has been designed to produce less drag over previous generations.

There are several accessories available for purchase separately or in a bundle, including the DJI RC Pro which is a 1,000-nit display that supports up to 15 km of video transmission.