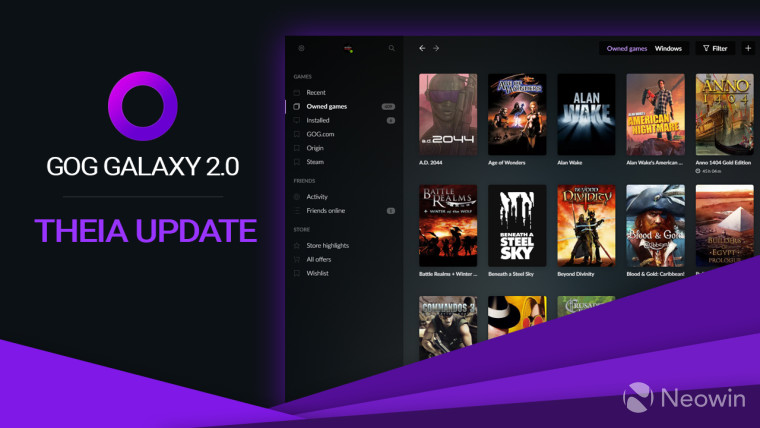 As you may remember, back in December, GOG's Galaxy 2.0 unified library manager entered open beta, following the announcement in May, beginning of closed beta in June and a number of rather major updates since. The latest, Argus Update, dropped at the beginning of December and now, there's a new version in town: the Theia Update.

Before we move on, it's important to state that since its announcement, Galaxy 2.0 has also received other, more minor updates in the interim, one of which arrived at the tail end of February and bumped the version number up to 2.0.13. The one we're covering here is version 2.0.14. Note that the overview below is made possible thanks to the additional contribution of our deal compilation maker extraordinaire, Pulasthi Ariyasinghe.

Unsurprisingly, the bulk of changes concerns Galaxy 2.0's library management, which in the Theia Update has been enhanced via a number of convenience tweaks or additions.

The most visible of these is the ability to manage and display games from subscription services. In Settings (cog in the upper left > Settings), under Features, there's a new section which allows you to toggle the display of titles depending on the subscription, although it currently seems to only offer Xbox-related options (Game Pass for PC, Game Pass for Console, Game Pass Ultimate, and Xbox Live Gold).

There is a checkbox to detect and show games automatically, although it's greyed out, with the tooltip stating that the "Feature for this platform is unavailable", regardless if the person has or does not have an active subscription.

That said, if you happen to have one of the Xbox-related subscriptions for now, you'll be able to group your games by 'Subscription', a new option that's available both in Grid and List view. Games you have bought already will appear under the 'Not in subscriptions' sections. Additionally, a new 'Subscriptions' bookmark will appear in the left sidebar, although it is permanent, and like 'Recent', 'Installed', 'Owned' and - when applicable - 'Downloads', it cannot be renamed or dragged to a different spot.

Among the new features there's also something called 'Sorting titles', which in essence allows you to retain the game's official denomination, but add a custom one on top, which Galaxy 2.0 will look for when you choose for your library to be sorted by title. In the example you'll see in the gallery below, changing SimCity 4's sorting title to just 'a', yielded the expected result: the game was put at the top of the pile if the aforementioned sorting option was picked.

Another welcome feature is the expansion of the right-click context menu, which now allows you to rate the game, check for updates - for GOG games only -, manage the installation - i.e. uninstall or configure the game -, and finally, add custom executables.

On the subject of custom executables, this feature gives you the ability to add command line arguments (run windowed for example), as well as treat extras such as manuals or map editors as executables. By right-clicking a game and going to Manage installation > Configure, then checking the 'Custom executables / arguments' under 'Launch parameters', you'll be able to customize details such as the path, arguments, and labels - though not for the pre-defined ones it seems -, as well as duplicate a specific template and set the executable as default. To remove a custom one you've added by accident, you can click on the file path and choose 'Remove executable'.

Note that this treatment of extras (manuals and such) as executables that can be launched from the right-click context menu is only available for GOG games.

There are some minor UI tweaks too, which we'll discuss in the next section. 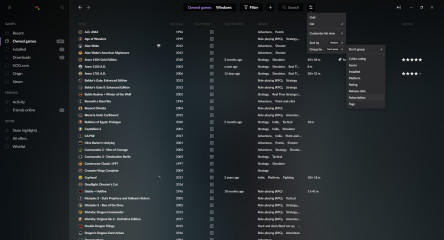 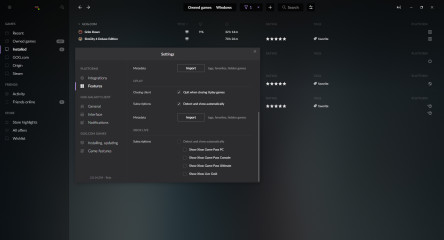 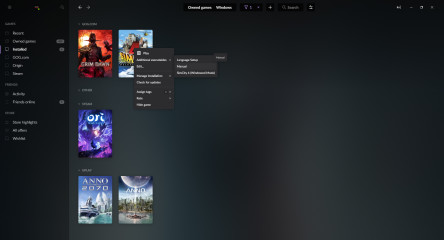 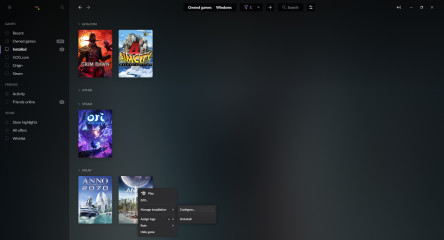 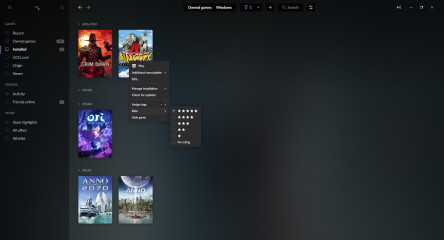 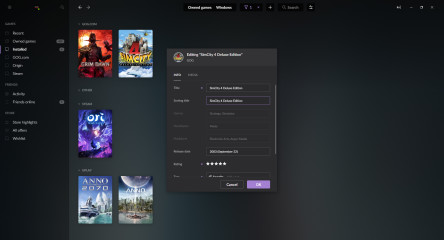 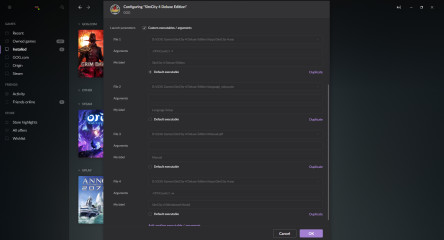 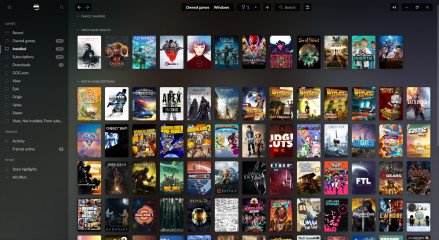 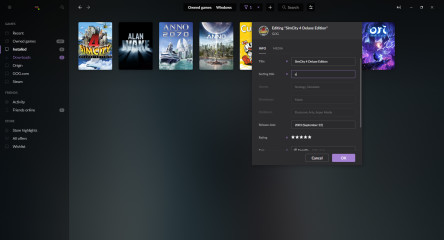 Comparatively, this section will be rather short, as the changes to the user interface are quite minor, and thus easily looked over.

A nice touch of consistency has been brought over to the List view, which now displays an icon (a monitor) for games that are already installed, which changes to a play button as soon as you hover over it. This is the same behavior that was previously present only in the Grid view.

The 'Downloads' section has gotten a slight facelift as well, with the columns showing the percentage downloaded, download status, and total download size now being shrunken down and moved to the right. In addition, you're able to drag-and-drop your way to your preferred queue, and if you drag a queued for download game to the top, it'll pause the current download and begin downloading the one you've dragged to the top. Completed games will appear on top of the queue, with the option to play them straight from the Downloads page. Lastly, you can pause all of the ongoing downloads via the handy button at the top, of the page, if you so desire.

Last but not least, you'll notice that buttons which aren't the active / default selection - like 'Import' or 'Cancel' - are no longer a light grey, but rather have the same shade of grey as the overall UI, with a slightly more pronounced border for visibility.

Despite the hefty amount of additions, there are some things still missing. For example, while you can edit a game's title, sorting title, rating, release date, tags, and visibility, you can't do that for the publishers, developers, or genres sections. It's unclear whether this will be coming at a later date or just won't be available at all, since the tooltip still proudly points out that the feature is "coming soon".

Likewise not yet implemented, and this time also part of the list of promised features is cross-platform chat. You're able to, for example, view the profile of one of your friends of Steam via the optional Friends sidebar (on the right), but you can't message said friend yet. Again, this is an open beta still, so there's no indication of when we could see this feature.

One other thing, although minor, is the fact that Galaxy 2.0 doesn't have a 'Check for updates' option, at least not for the launcher itself. There is auto-update functionality implemented, thus this is not the end of the world, but rather a nice to have more than anything.

As mentioned at the beginning of this post, Galaxy 2.0's Theia Update bumps it up to version 2.0.14 (specifically 2.0.14.254 as of this writing), which adds a number of things. I'll split the changelog into different sections so it's easier to digest.

First up, the new features:

Then, here are the other changes:

No, you haven't read that wrong, there are no known issues currently. If you want to check out Galaxy 2.0 for yourself, you can head to this link, and in case you're curious about what the other major updates brought to the table, check out our previous coverage. It is worth mentioning that GOG did send out an email stating that Galaxy 1.2 would be updated to and up-to-date version of Galaxy 2.0 "in the upcoming weeks". It's unclear whether this means the final version, or if Galaxy 2.0 will still carry a beta tag.

What do you think about the new update? Sound off in the comments below!