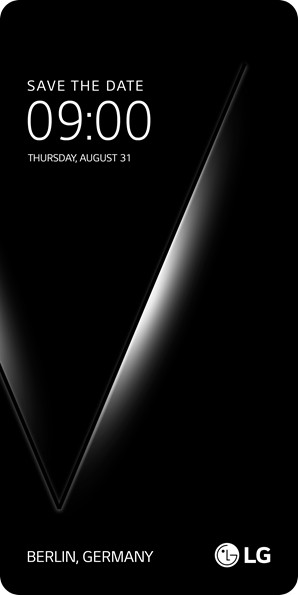 In a little over a month, LG will hold an event that will take place during IFA in Berlin. While it hasn't confirmed exactly what will be announced, it did leave a bit of a teaser image in its invitation to the press that that alludes to the revealing of the next iteration in its V-series.

According to an exclusive report from Android Authority, LG will make the handset available globally but will launch the device in South Korea starting on September 15. Luckily, those in the United States will only have to wait a couple weeks, since the firm will make it available for sale on September 28. While there weren't any details about when the handset would go on sale in Europe, Android Authority did speculate that it should arrive on September 28 since this is documented as the handset's global release date.

Naturally, we won't know for sure until August, when LG will hold its event and will expectedly reveal all of the details about the V30. The firm's unveiling event will take place at 9PM CET on August 31. IFA Berlin is set to start a day later and will take place from September 1 to September 6.