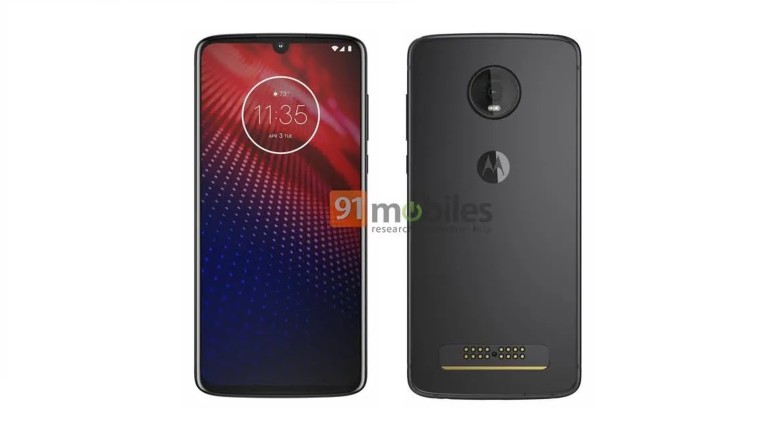 According to 91mobiles, a leaked internal marketing document has exposed details about Motorola's upcoming flagship, the Moto Z4. Apparently, the marketing material revealed information about the technical specifications and features that the handset will have. The report also suggests that according to the document the Z4 will be released soon - sometime in the "coming months". However, 91mobiles seemed a little unsure as to whether this leak concerns the Moto Z4 or the Moto Z4 Play, a completely separate model.

It is believed that the Moto Z4 will have a Full HD OLED display measuring 6.4-inches wide and that the handset will run stock Android Pie out the box, powered by the Snapdragon 675 SoC chipset. The 4G phone will have support for 5G, enabled via the 5G Moto Mod. Much like Motorola's Moto Z4 Play, rumors suggest the smartphone will feature an in-display fingerprint sensor. Allegedly, the handset will come preloaded with the usual Motorola features such as Moto Display, Moto Actions and Moto Experiences, as well as additional ones like Google Lens and Digital Wellbeing.

Other Z4 details allegedly revealed by the leak include a 3,600 mAh battery with TurboCharge fast-charging, a water-repellent design and a 3.5mm audio jack. Additionally, it is suggested that Motorola's Z series will have the audio jack for one more year.

Regarding optics, the report states that the Z4 will sport a 48MP rear camera, which will be able to capture 12MP images due to Motorola's Quad Pixel technology and feature a Night Vision mode. As for the front snapper, it is believed to be a 25MP camera capable of capturing sharp 6MP images in low-light scenarios - thanks to the Quad Pixel technology - and a Group Selfie mode. Reportedly, it will also have AR stickers and AI features.

Rumors claim that the smartphone will have a Type-C USB port, a waterdrop notch, and a 16-pin pogo connector to enable Moto Mod connectivity. It is expected that the Moto Z4 will offer two variants of RAM, 4GB and 6GB, as well as two versions of ROM, 64GB and 128GB.

Apparently, the marketing material stated that compared to other smartphones in the market, the Z4 will be sold at “half the price”. Although the leak did not reveal an exact release date, it is rumored that the Moto Z4 will be released on May 22 for ₹37,990 - approximately $550.