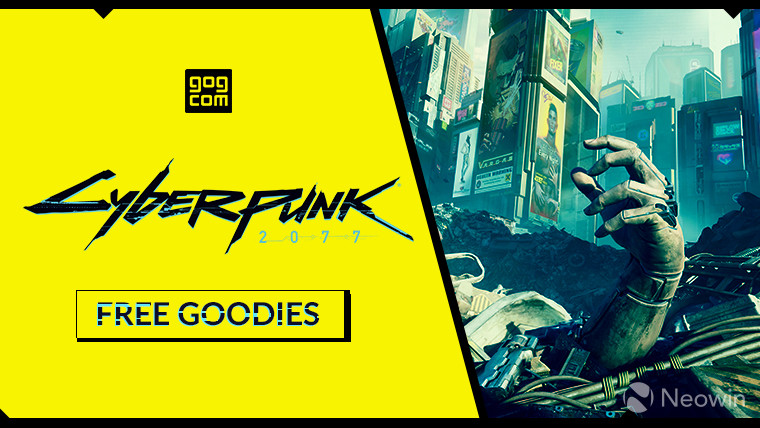 Cyberpunk 2077, the brand-new RPG from CD Projekt RED is set to come out for current-gen consoles and PC on November 19 after its latest delay. That said, the developer will be giving folks another look at gameplay tomorrow, as it kicks off Night City Wire. To complement all that, there are also some goodies up for grabs on sister site GOG.

Coming in at a hefty near 4GB in size, the goodies pack contains both previously released and new posters, wallpapers, screenshots, gang graffiti, as well as concept, cover, and steelbook art. As always, you're able to download these either individually or as a single archive, for convenience.

In addition to this, there's finally a time slot for Night City Wire, the umbrella term for what seems to be a series of events leading up to the release of the game. The first episode of this, as confirmed in the tweet below, will be about 25 minutes in length and kick off at 6PM CEST (9AM PT, noon ET). You're also able to see a small clip of what is in-game footage (according to the disclaimer in the bottom left):

Join us tomorrow, June 25 at 6PM CEST, at https://t.co/cBU8yS6pfc for the first, 25 minute episode of #NightCityWire, where we are going to show you a brand new trailer, present fresh gameplay footage and chat with the devs in detail about one of the game features, braindance. pic.twitter.com/2RReyCMkce

The wording implies there will be multiple episodes under the Night City Wire banner, though dates and times for subsequent installments have not been announced yet. 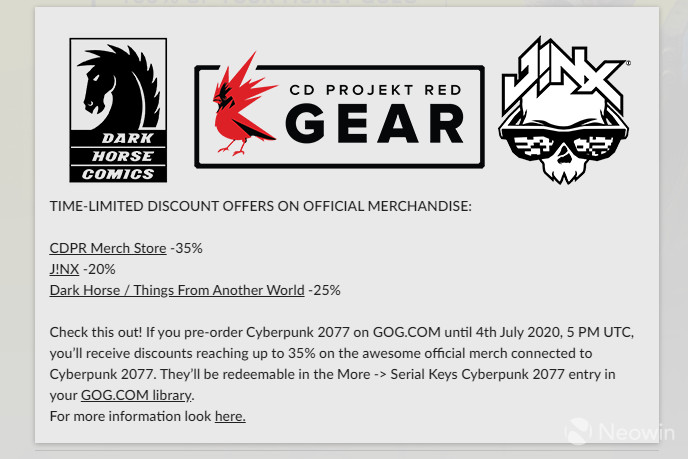 Getting back to the game itself, you'll be able to also grab it via the Ultimate RED Collection, which includes all of the previous CDPR games and Cyberpunk 2077. Buying it before July 4 at 5PM UTC will also net you a series of discounts for Cyberpunk-related merchandise from partners like Dark Horse, and J!NX, as well as the CDPR Merch Store. These discounts are valid whether you buy the game via the collection or individually.

Getting back to the freebie at hand, to claim it, simply navigate to the GOG homepage and click the 'Get it FREE' green button in the banner at the top of the page. The giveaway is live until July 4 at 5PM UTC, which is 10AM PT, 1PM ET in the States.

Update: The folks at Twitch have reached out to Neowin in order to share a few more details in regards to Night City Wire.

The pre-show will start 10 minutes prior to the event itself - so 8:50AM PT / 12:50PM ET / 5:50PM CEST - and will recap the Cyberpunk 2077 news so far. After Night City Wire itself, a post-show hosted by Jesse Cox and Alanah Pearce will kick off a live Q&A with Senior Quest Designer Philipp Weber.

Viewers watching from either channel will get a Johnny Silverhand Twitch emote available only during Night City Wire.