AMD's upcoming Ryzen 7000 and the accompanying Socket AM5 has received an official release date yesterday. The launch is happening at the end of this month on August 29, something which was already suggested by earlier reports. The availability of the chips as well as the AM5 boards though is apparently slated for September 15, which more nearly three weeks after the official launch. A new report today suggests this has to with some firmware issues on Ryzen 7000 and AM5. Although unconfirmed, such teething issues are not uncommon on a brand new platform.

For those who can't wait to get a glimpse of the chips as the launch still nearly two weeks away, an alleged picture of an upcoming Ryzen 7000 series SKU, in the form of the Ryzen 7 7700X, has leaked, courtesy of an AnandTech forum member cortexa99.

The picture shows a retail 7700X seated inside the new AM5 motherboard. The new socket is the first LGA-based mainstream socket on the AMD side, as so far the company has been using PGA. 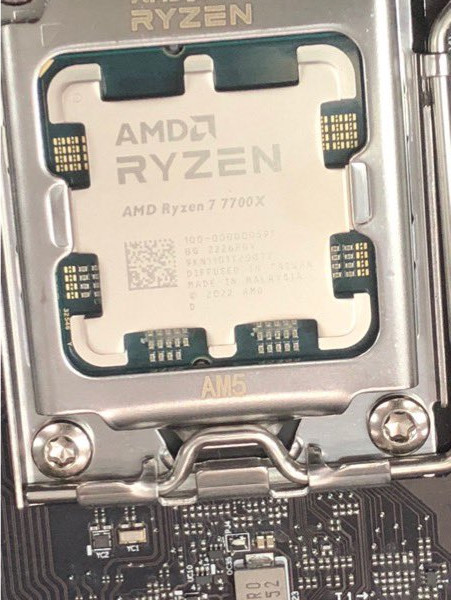 This means that final retail samples of the chips are already going around, and it could lend some credibility to the rumor of delayed reviews and availability that we had earlier today.